Vegetables in the news

You can often find the same subject on page one and the op-ed page of the New York Times on the same day, provided it's an important one like war, terrorism, financial crisis or politics.  But you don't often find it when the subject is a vegetable.

In today's newspaper, however, sweet potatoes hit the daily double.  On the front page, we learn that we're having a record harvest this year in the US, that sweet potatoes are being served at White House state dinners and appearing on 40% more restaurant menus than last year.  The bad news is that the engine of growth is the sweet potato fry, perhaps tying with sweet-potato-marshmallow casserole and sweet-potato pie for least nutritious preparation of a fabulously nutritious vegetable.

But the good news is that even if you fry it, the sweet potato is strong medicine for what ails you.  They're great for diabetics because they contain complex carbohydrates that don't raise blood sugar the way refined sugars and grains do.  And they're great for nutrition in general, rich in vitamins A and C, beta carotene and fiber. 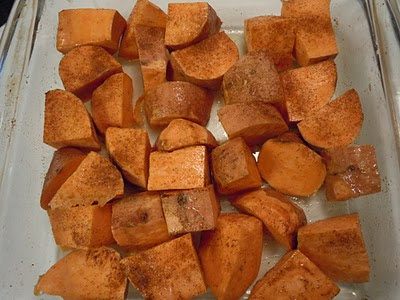 roasted sweet potatoes, with a little paprika sprinkled on for pep

The Center for Science in the Public Interest rated all vegetables on a complicated scale where points were awarded for vitamins and other good nutrients and deducted for fat, sodium, sugars and other bad nutrients.  The sweet potato scored 184, with nothing else within 100 points of it!  (The next three were white potato, spinach and kale.)  If you like to count calories, say about 130 for a medium baked sweet potato.

What I like about sweet potatoes is that unlike white potatoes, I'm delighted to eat them absolutely plain -- no butter, no salt, no gravy necessary.  I usually just bake them about an hour in a 400-degree oven, alone or alongside the chicken breasts.  They're also great cut into chunks, tossed with a little olive oil and roasted at 425 degrees for maybe a half hour.  Roasted vegetables, of course, can include both kinds of potatoes, winter squash, beets, carrots, parsnips, turnips, rutabaga, broccoli, cauliflower, onion and garlic, especially nice for a crowd, as everybody can choose what they like and leave behind what they don't.

On the op-ed page of the Times, we learn that plant scientists are developing new varieties of sweet potatoes to be grown in Africa, providing far more nutrients than the indigenous sweet potato, popular but vitamin-poor.  Some think that the sweet potato may be a key to overcoming malnutrition on that struggling continent.

So on this Thanksgiving night, I'm thankful for sweet potatoes and resolve to serve them more often.  Not only are they nutritious, they're beautiful, vanquishing the all-white meal in a millisecond.
Posted by Kathleen Loomis at 10:17 PM