I am amused to see, in antique stores or the back of other people's kitchen cabinets, gravy boats that might hold two cups, overflowing.  In my family the official gravy container is our cat pitcher, a wedding present, that will hold eight and a half cups if it really has to, and isn't at all happy with less than five or six. 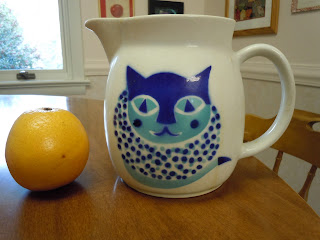 Many people besides those in my family, I suspect, love gravy but may be intimidated by making it.  If you're one of them, listen up.  Making good gravy does get a lot of dishes dirty, but it's not difficult.

The starting place, of course, is the roasting pan in which you have made a turkey.  The more good brown drippings in the bottom, the better your gravy will be, so I put the turkey neck, extracted from the top cavity, onto the rack alongside the bird for even more juice.  When the turkey is finished, remove it from the oven, remove it from the pan, set it aside (wrapped in foil and towels to keep warm, or turned over to your helper for carving) and take the pan back to the stove. 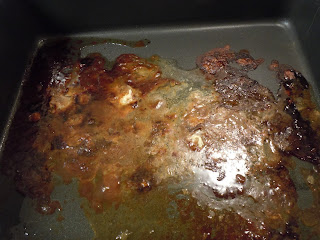 Put a cup or so of hot water into the pan and scrape all the browned bits free.  I use a plastic spoon with a straight edge for good leverage.  Don't worry about the strange congealed globs of unappetizing mystery protein; stir them in too.  They will give up their good essence but bow out long before showtime.  If the browned bits seem to be resisting arrest, you may want to put the pan over a burner and heat it up a little to speed the process, or add more water.

Eventually, when the pan is clean, decant the liquid through a sieve into a clean pitcher or bowl.  Press all the liquid out of the debris in the sieve, then pitch the debris.  You're left with a pitcher of brown turkey juice, with fat beginning to rise to the top.

Contemplate how much liquid you have in the pitcher, compared to how much gravy you would like to end up with.  There's almost certainly not enough, so add more.  You could add chicken or vegetable broth from a can, or even plain water, but my favorite additive is found in the back of my fridge, the little mason jars of juices from baked chickens of the past.

Every time I fix a couple of chicken breasts in the oven, I deglaze the baking pan with hot water and scrape up all the good brown bits, just as described above.  Again, I strain the juices through a sieve into a mason jar and stash it in the refrigerator.  Usually the juice gets used within the next week to moisten pasta or risotto, or to add to a soup.  But as a turkey holiday approaches, I save it to add to my gravy.

Yesterday I had three little jars of chicken juice saved up, which went into the pitcher.  I ended up with six cups of juice. 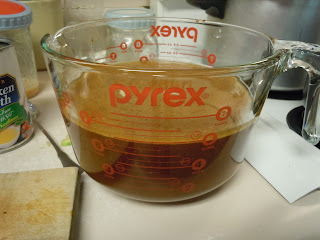 In a time-free world, you could stick your pitcher of turkey juice in the refrigerator, come back three hours later, lift the risen and congealed fat off the top, measure six tablespoons and discard the rest.  But in the real world, the turkey is waiting on the counter, the guests are going wild with the delicious smells, and you need to get that gravy going NOW.  So you don't have time to let the fat and juice separate themselves for accurate measurement.  Not to worry.  This is home cooking, not a cookbook testing laboratory.

Spoon off several tablespoons of liquid from the top layer of the pitcher, capturing as much fat and as little juice as possible.  Put it in a clean saucepan, large enough to hold all the liquid in your pitcher.  Add as many tablespoons of flour as you have cups of liquid, more or less.  Do not agonize; you can always add more flour later if you need to. 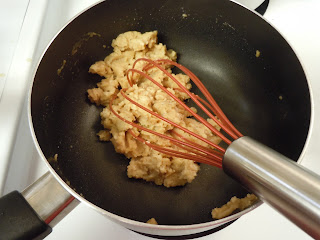 Cook the flour and the fat a few minutes over medium/high heat to make a roux.  Stir with a whisk.  This is a stage when you must devote your full attention to the gravy, so have your helpers do other tasks if needed. 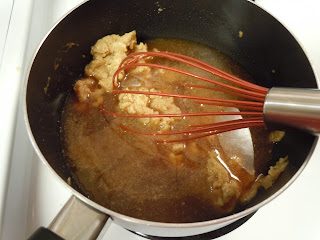 Then you can turn down the heat to medium and start to incorporate a little more liquid, whisking hard.  After all the lumps have been stirred down into a smooth soup, you can add the rest of the liquid from your pitcher, in two batches.  Keep whisking -- lumpy gravy is a cliche that you want to avoid.

After a couple of minutes, when the gravy has gotten hot again and is starting to bubble, you can stop whisking long enough to taste (probably needs a touch of salt) and to gauge the texture.  If it's too thick, add a little hot water.  If it's too thin, you'll need a little more flour. 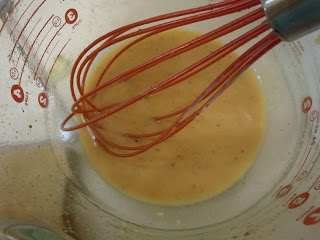 Here's how to do that without getting lumps.  Pull a half-cup or so of the gravy out of your pan and put it back into your empty pitcher.  Add another tablespoon of flour and whisk till it's smooth and totally incorporated.  Then pour back into the pan and whisk it in.  Whisk some more on general principles, making sure no colonies of thick gravy have collected in the corners of the pan.  Then decant into your serving boat or pitcher.

If you haven't managed to delegate last-minute tasks like mashing the potatoes, cap the gravy pitcher with foil and cover with towels, or stick it back in the oven if the heat has been off a while.  It will stay warm while you finish your cooking and serving.

Finally, pour gravy over everything in sight!  Somehow, I missed the meat before I took this picture, but remedied the situation immediately with another ladleful.  There was plenty to go around. 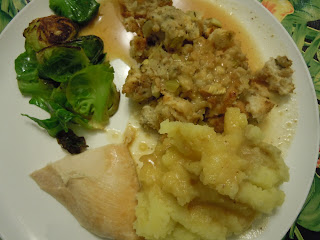 Posted by Kathleen Loomis at 7:10 AM