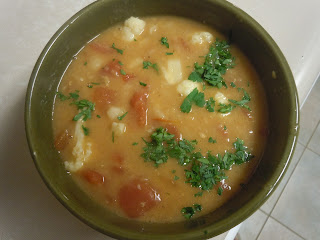 Last night's dinner -- bean soup with cauliflower and canned diced tomato -- looks a lot like the bean soup behind the title of this blog, doesn't it?  But it's different!


Soup du jour is one of my favorite meals. The plan can begin from scratch with a favorite ingredient, or emanate from leftovers or vegetables that should probably have been eaten two days ago. I tend to make up the plan as I go, but these basic concepts underlie my efforts:

-  Always start with chopping and browning an onion or two.  There is no kind of soup that won't benefit from that flavor, and it makes the kitchen smell great.  If you're running late on fixing dinner, the smell will make people think the situation is under control, even if it's not.

-  After you’ve browned the onion, garlic and other ingredients but before you start adding liquids, deglaze the pot with a little wine (fortified wines like marsala, vermouth or sherry are particularly nice). Stir around a little to dissolve all the good brown stuff on the bottom of the pan, then add the rest of the wet ingredients.

-  Always have a lot of chicken broth on hand. I’m happy with Kroger canned. Strangely enough, their “low fat” variety has less sodium than the “low sodium” variety, in addition to lower fat. Add chicken broth to anything that needs more liquid at the last minute.

-  Life is easier if you have one or two default seasonings that can go into most varieties of soup. My favorite is Penzey’s Galena Street Seasoning, a mix of salt, sugar, black pepper, paprika, nutmeg, sage, cayenne and red pepper. Ordinarily I shy away from any seasoning mix that includes salt, but you do need salt in most soups, especially those containing beans. Less than a tablespoon of Galena Street is usually all the seasoning you need for a small-to-medium pot of soup; you know it will have enough salt, enough heat, and enough flavor oomph without pesky blending and tasting.

-  Keep some dry, canned or frozen ingredients that you can add to soup at the last minute if your pot looks a little skimpy or somebody new shows up for dinner. For instance, diced tomatoes, various kind of beans, tiny pastas, olives, chicken broth. I don't usually have frozen vegetables on hand but a handful of corn, peas or edamame would do nicely too. Bacon, ham, pepperoni (turkey pepperoni if you’re feeling healthful) or other cured meats can hang around the fridge for a while and add both bulk and flavor.

-  Yesterday’s leftovers can become today’s soup. Start with onion, of course. Cut the leftovers into bite-sized pieces and throw them into the pot. You’ll probably need to add liquid (chicken broth, wine, tomato juice, milk, whatever). I also keep canned cream soups on hand (cream of onion or celery is a good all-purpose base; cream of shrimp is great for seafood or vegetable leftovers) as a base. If it still doesn’t look good enough to eat, add any of the things in the previous paragraph, or stick a small potato in the microwave for four minutes and dice it into the soup.

-  Sometimes it helps to put everything into the blender and make it smooth.  That also helps incorporate ingredients like cheese or tomato paste that might otherwise not be properly distributed throughout the soup.

-  Most soups improve with a grating of parmesan cheese at the table. And/or you can stir a spoonful of pesto into each bowl.

-  Many soups improve if you put finely shredded spinach or kale in the bottom of the bowl before you ladle in the hot soup. You can practically fill the bowl with greenery because it will shrivel to nothing in the hot liquid. It’s tasty, beautiful and nutritious.

-  Make bean soup in quantity, using at least a one-pound bag of beans.  It's no more work to cook up a huge batch than a small one, and after dinner you can freeze the rest in one-quart containers.  Then someday thaw out one quart of the soup and use it as a base for anything else you have on hand, like the half cauliflower languishing in my vegetable drawer last night.  It's surprising how many foods will play well with beans, and since the beans provide both bulk and protein, small quantities of leftovers will work just fine.
Posted by Kathleen Loomis at 10:11 AM

Email ThisBlogThis!Share to TwitterShare to FacebookShare to Pinterest
Labels: soup