My son leaves on Monday for Europe so we had to celebrate Thanksgiving early.  While all the rest of you were having an ordinary Friday, we were baking pies, making cranberry-orange relish and roasting a turkey. 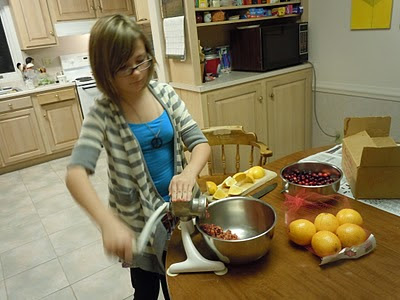 Many years ago I went through a phase of hating Thansgiving, at least the preparation of a big dinner.
As a kid I remember nothing much about Thanksgiving; we didn't cook a big dinner and might as likely have spaghetti as a roast chicken.  When I got married and my husband informed me that the most important part of a holiday was A Big Feast, I didn't much like the idea.

As often as I could get away with it, I announced that my favorite way to chow down, since we apparently had to do so, was in a restaurant.  Coming up with the restaurant, however, was easier said than done; it was always crowded, expensive and frazzled; and the food was never that great.  But we did avoid cooking and doing dishes.

Finally one year I decided this was stupid -- if people wanted a big turkey dinner I might as well make it at home, so I could get the kind of stuffing and gravy I liked (as far as I'm concerned, you don't have to serve anything else to make Thanksgiving official, except maybe some cranberry-orange relish).  And since then I have learned that making a turkey dinner is one of the easiest things a cook can do.

The tricky part is buying the turkey far enough in advance that it thaws.  Although I do recall one Thanksgiving morning when I awoke and realized the turkey was still in the freezer.  I put it in the microwave, hit auto-defrost-18.00 and a l-o-n-g time later it was ready to go in the oven, with no hard feelings.  Miraculously, the metal clamp that held the bird's ankles crossed, which I forgot about till it came out of the microwave, didn't arc out and start a fire!

What you must realize is that no matter when the turkey gets done, you take it out of the oven, wrap it in foil and then in a whole lot of big towels to stay warm, and put it aside until everything else is done.  Take your time with the gravy and potatoes and vegetables; the turkey will still be there when it's time for dinner.  If one of your helpers is feeling particularly ambitious, he could start carving and put the slices onto a hot platter, thus speeding the eventual serving of plates.

You must also realize that the most important part of the dinner is the gravy.  If the gravy is good, and there's plenty of it, people won't notice other areas that might not be 100%.  Since those of you whose sons aren't going to Europe are probably not going to fix your big dinner till next week, I'll write up my gravy tutorial and post it in plenty of time for you to make magnificent gravy in case you don't already know how to do so.
Posted by Kathleen Loomis at 10:56 AM