Breakfast on the road

It's gotten expected that practically every mid-range motel offers free breakfast with your room.  Years ago that could be pretty nice, at least in some places.  But these days, free breakfast is often an exercise in hunting and gathering.  What can you find, amid the flotsam and jetsam of the food processing industry, that you might actually want to ingest?

The mainstay of free breakfasts is always the donut platter, where you can get your sugar levels back up to diabetic range in case they have fallen during the night. 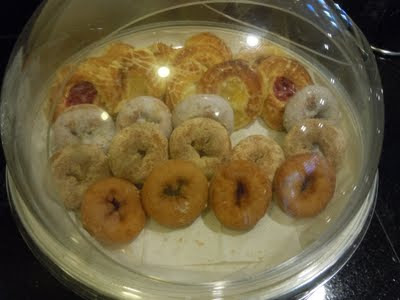 Some chains are famous for their waffles, which I think are popular with visitors partly because of the elaborate procedure for measuring out the batter, pouring it into the very hot iron (avoiding second-degree burns, if possible), flipping it over, listening for the beeps, and decanting it onto your plate.  And of course, the ever-present danger that you will do something wrong and open the waffle iron to find a messy, half-baked pile of dough that has to be forcibly removed.

There's often cereal, in those pitiful packages that rip open to reveal a dish-like receptacle, into which you can pour some milk, providing you didn't tear it too far open.  In my experience, mostly you have a choice of three overly sugared varieties.

On a recent journey we discovered a new breakfast treat: pre-formed omelets ready for your microwave pleasure.  Somehow we resisted their allure. 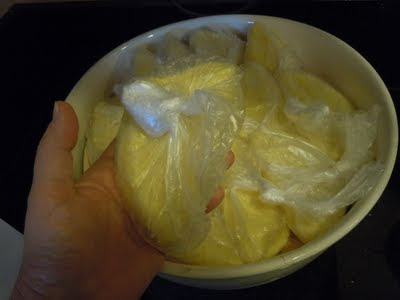 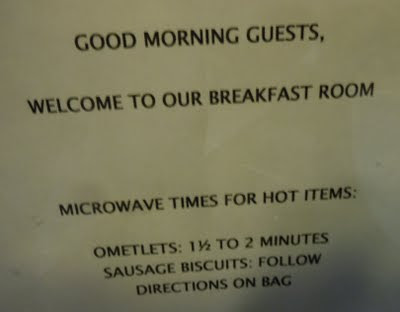 Email ThisBlogThis!Share to TwitterShare to FacebookShare to Pinterest
Labels: breakfast

The food on our cruise ship was great, especially the salads, which always included some combination of goodies that you probably had never run into before.

As a beet lover from way back, I took a big serving of this salad, which incorporated grapefruit and water chestnuts along with some kind of nondescript crunchy white (now pink) stuff. 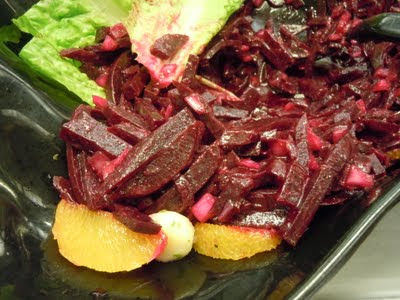 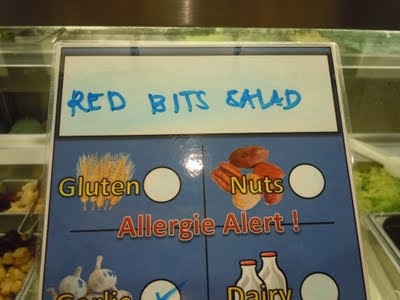 Posted by Kathleen Loomis at 11:24 PM No comments:

On our recent trip to Central America we saw LOTS of bananas! 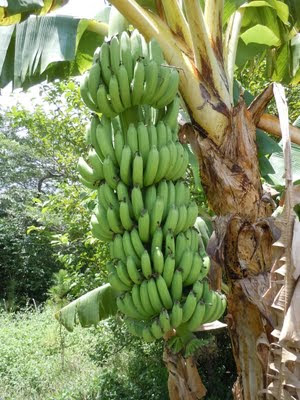 Here are bananas growing at a botanical garden in Nicaragua. 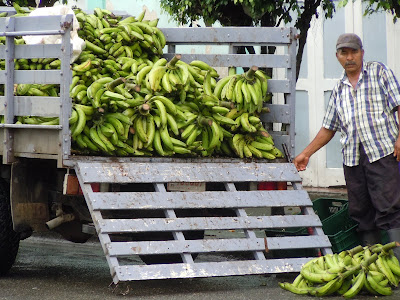 Here's a guy unloading them on a street corner on the Caribbean coast of Costa Rica. 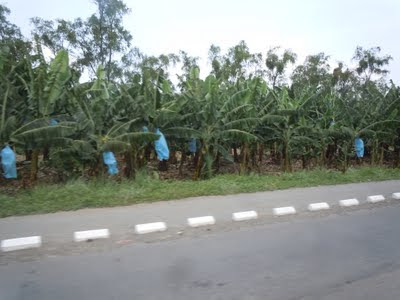 Here's a drive-by shot of a big banana plantation on the Caribbean coast of Guatemala.  Unlike the unfettered fruit at the botanical garden, commercially grown bananas are coddled by being wrapped in blue plastic for protection from birds and animals.  I'm sorry we couldn't stop for a better photo op.

Each banana tree yields only one crop (i.e. one bunch of bananas).  So in the plantations, a small tree is started at the foot of each mother tree; the mother tree will nurture it, and by the time the mother has produced its bunch, the baby tree is large enough to start producing its crop in turn.  Perhaps you can see the small trees, here about four feet tall, growing right next to the trunks of the mother trees.
Posted by Kathleen Loomis at 6:45 AM No comments:

We've just returned from a cruise to Central America, and we couldn't help but notice all the street vendors selling fruits and vegetables.  While there are conventional markets -- the local jargon for a convenience store is "super mini" -- a whole lot of people seem to get their vittles close to home.

Here are some of the scenes we saw from the bus and walking about towns in Guatemala.  Wish we had been able to sample them as well as look.  (Two problems: the bus had miles to go before we slept, and we had been given the fear of God by the ship's doctor regarding eating local food.)  But it was a feast for the eyes if not the stomach! 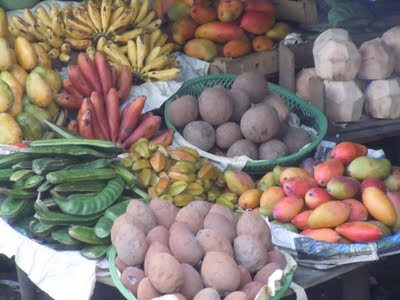 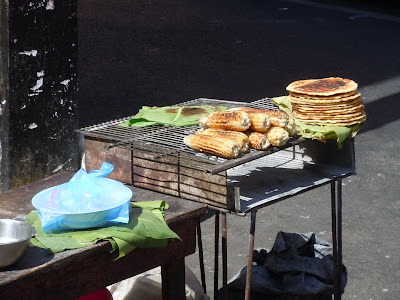 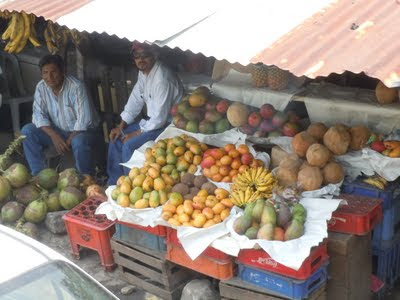 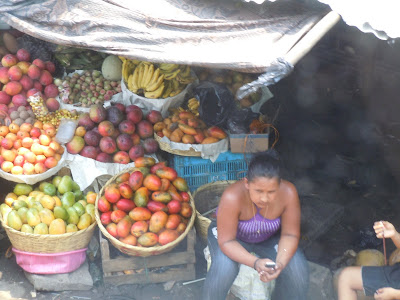 Posted by Kathleen Loomis at 9:35 PM No comments:

I mentioned in a recent post that scientists now think sugar affects your brain a little like cocaine -- in other words, it's addictive.  I don't know anything about the chemistry of controlled substances, but I can testify from my own past how difficult it can be to break a sugar habit.

When I was a teenager I started to drink tea and coffee because it seemed like the grown-up thing to do, and didn't like either one very much so I added sugar.  After a couple of years I realized I didn't like coffee even with sugar, so I quit drinking that, but the tea became my favorite drink.

After a decade or so I decided that it might be a good idea to cut back on the sugar.  I seem to recall doing it gradually, and that it took a long time to get down to zero, but I hung in there, and am glad I did.  Today tea is one of my most comforting pleasures, and it's great to be able to down cups and cups of it without worrying about calories.

Similarly, I decided decades ago that I wasn't going to put syrup on pancakes or waffles.  I had always done this reflexively, just because that seemed to be the way everybody ate them.  But as I was tied to the stove making pancakes while everybody else was at the table eating, I would frequently eat one straight from the pan (without benefit of syrup, because the syrup was on the table) and decided they tasted better that way.  This habit was easy to break because pancakes weren't an everyday occurrence.

But my lifelong relationship with soft drinks is another story.  I never drank diet sodas, just industrial-strength.

At several times during my work life, I got into the bad habit of a sugar fix in the middle of the afternoon -- every afternoon!  It was good to take a three-minute break, leave my desk, go get a Coke from the machine, and come back to the delicious fizz of the first mouthful. The sugar/caffeine lift was great.  But occasionally I would decide to stop -- probably more for economic than health reasons.  I was amazed and chagrined at how hard that would be.

I really did have some kind of withdrawal symptoms, whether entirely from brain chemistry or partly from the simple difficulty of breaking any habit.  (Interestingly enough, I never had those symptoms at home on a Sunday afternoon, only at the office.)  The symptoms would pass, of course, and I would be daily-Coke-free for months or years. But I often relapsed and got back into the same bad habit.

A similar problem came up sometimes when a co-worker would keep candy available on his desk for all comers, or when I decided it would be a good idea to keep candy in my own bottom drawer.  It was so easy to get into the habit of that afternoon sugar, and so hard to break it. 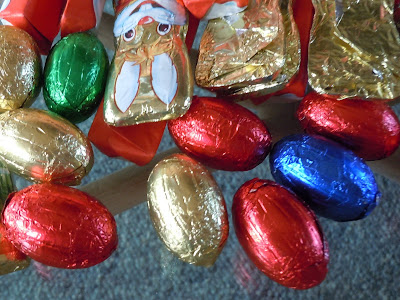 In my experience, it was easier to give up sugar entirely in a particular context, such as sugar in my tea, than to cut back the chronic/scheduled sugar.  I don't think this was so much a physical addiction as a very strong habit.  I could drink the occasional Coke with lunch or as a snack, or eat candy now and then, without problems.  But the combination of sugar plus a regular time and place was stronger than I could deal with.

I think a lot of America's self-destructive love affair with sugar has this element of habit.  People probably think twice about having a piece of pie for dessert, but they will stop every morning at the coffee shop and always get a muffin, or always drink Coke at lunch.  They place their orders automatically, without considering whether they really want ten teaspoons of sugar.
Posted by Kathleen Loomis at 10:23 PM No comments: