As a mom myself, I am always alert to advertisements that take my name in vain.  Such as the flyer we got in the mail last week from McDonald's, announcing that "Mom Would Approve" the breakfast sandwiches pictured, and pushed with coupons on the back of the flyer. 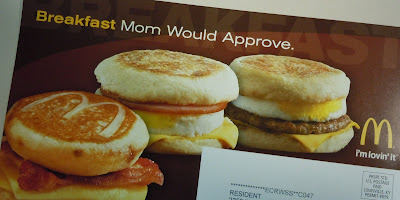 Well, not this mom.

What surprised me on my calculator-armed visit to the McDonald's nutrition website was that the huge sodium dose from those two breakfasts does not come from the sausage patty, which I would have expected from highly seasoned cured meat.  That has only 310 mg of sodium -- but the biscuit alone has 680!  The egg McMuffin has 850 mg of sodium, while adding sausage adds only 80 mg more.

Suppose you need a sugar jolt in the morning and order a deluxe warm cinnamon roll.  That gives you 590 calories, but only 36% of them come from fat.  Does that make you feel healthy?  It shouldn't, because that roll contains 36 grams of sugar -- almost as much as a 12-ounce can of industrial-strength Coke.  (And how many of those cinnamon roll eaters are washing them down with a large industrial-strength Coke?)

You can hit the junk food trifecta -- fat, sugar and sodium -- by ordering hotcakes and sausage.  Even without your Coke chaser, that will deliver 770 calories, 39% of them from fat, 930 mg of sodium and 45 grams of sugar.

Maybe you'd like a McCafe hot chocolate, featured in the coupons, with your sausage biscuit.  If you order the large, it'll bring 460 calories, 35% of them from fat, and 54 grams of sugar.

In the name of moms everywhere, I take offense at being used to endorse breakfasts that are tasty, convenient, cheap, and a one-way ticket to a cardiac bypass, if diabetes doesn't get you first.  But it isn't just McDonald's that wants us to do the wrong thing.  Our whole food system socializes us to want fats and sweets for breakfast -- and has even brainwashed us into thinking that's a nutritious way to start the day.

I've been thinking a lot lately about breakfast, and what we really should be eating for good nutrition.  Not sure I have the answer yet, but I know it isn't McGriddles breakfast sandwiches.
Posted by Kathleen Loomis at 10:32 PM