The end of summer

I'm a cold weather girl, coming off a really nasty summer (we had ten days over 100 degrees and 50 more over 90) so I'm rooting for the heat to break.  It's been in the 80s most of this week, but the cold front is due to come through tonight, and they're talking about frost and other wintry weather stuff.  So it seemed like a good day to close down many aspects of our summer way of life (and not a minute too soon in my opinion).

The farmer picked what was left of the basil, and it will probably become pesto tomorrow.  He picked blossoms and leaves from the nasturtiums for our salad tonight. 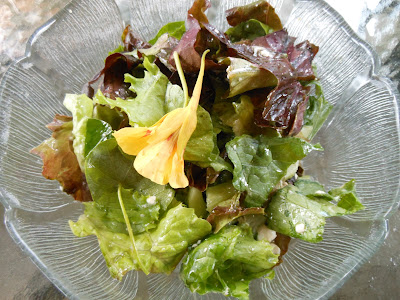 And we had one last dinner on our screened-in porch.  Our porch is one of those fancies that is glorious when the moment is right, and kind of superfluous all the rest of the time.  Unfortunately we haven't had too many right moments this year; even with a ceiling fan it's been way too hot to eat outside for most of the summer.  Tomorrow it will probably be too late.  But tonight it was beautiful, 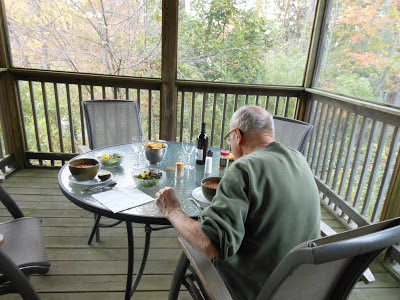 Posted by Kathleen Loomis at 8:19 PM No comments:

In the (salmon) pink

I remember to the day(s) when salmon became a staple of our family diet.  It was July of 1980, and we visited my sister-in-law in Alaska.  One day she bought salmon for dinner, and showed me how to cook it (a film of mayonnaise over the top so it wouldn't dry out under the broiler).  This was a new concept to me -- I'd never seen salmon in our grocery stores, and had eaten it only in restaurants. 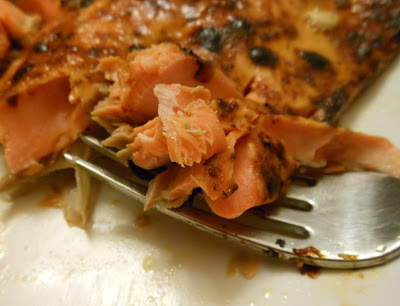 The salmon was wonderful, of course, fabulously fresh, only a few miles from its fishing grounds.  It was expensive but worth it.  We had it a couple of times during our visit.

When we came home to the landlocked Midwest, we stopped at the grocery on our way from the airport and to my amazement found gorgeous salmon at the fish counter -- at half the price we'd paid in Anchorage!

Seems that the fishing season had gotten delayed by some ugly disagreement between fishermen and government, and now there was such a backlog of fish in the big salmon ports that airplanes were taking off every three minutes, 24/7.  You could barely give away the fish, hence our bonanza at Kroger; apparently even stores that had never carried it before couldn't refuse.  And it must have been popular, because it's been there ever since.

We bought and ate lots of salmon for the rest of that summer, and forevermore.  I've learned to prepare salmon in many different ways -- broiled, pan-sauteed, baked -- and with many different flavor accents.  But in recent years I've become far more picky about the variety and provenance of my salmon.

We try not to buy farm-raised salmon; it tastes bland and insipid, and we worry about the potential for environmental degradation from the farm pens, not to mention the potential for disease in the closely crammed fish population.  But this year we've been blessed with what seems to be a bumper crop of wild-caught sockeye, more delicious than we remember from previous years.

I don't know where they come from -- probably Alaska -- or how long we'll enjoy this season's catch.  But we're loving it while it lasts.

Posted by Kathleen Loomis at 10:00 PM No comments:

Email ThisBlogThis!Share to TwitterShare to FacebookShare to Pinterest
Labels: fish

I always like to do things with leftovers other than just stand there and eat them from the plate, sometimes with the refrigerator door still open.  That's so trashy.  But sometimes my concoctions turn out better than usual.

Last week we had a butternut squash, which I cut in two and baked in the oven.  We ate less than half of it with dinner, leaving a lot of leftovers.  My first thought was to use the rest for risotto, because we hadn't eaten rice for a while.

But as I started to bring out the things for dinner, I was reminded that we had half a red pepper in the fridge, not sweet enough to eat raw.  And that we had a tray full of small red tomatoes, picked just before the vines got taken down for the year.  They had been slowly ripening on the kitchen table for a week, but definitely showing their survivor status.  They had hard dark blotches and tough skin, and inside they weren't the true red of a legitimately ripe tomato.

Sounded like both these red things wanted to become part of the risotto.  I cut up the tomatoes, discarding most of the skin and cutting away some unappetizing parts of the insides.  Cooked them up in a hot pan with olive oil, letting them brown (heck, even a bit beyond that) and then adding marsala to deglaze the pan.  After they had cooked for a while, turning dark brown, I decanted them and sauteed the peppers in the same pan, along with garlic, decanting them as well when they were done.

By this time the vegetable count was getting pretty high, so I took only half the squash.  As the rice cooked away (click here for the basic risotto tutorial), I mashed up the squash and added it to the bubbling pan.  When you add raw bits of squash to risotto they retain their shape and crunch, but if you add cooked squash, it almost dissolves into a rich, creamy orange sauce, which was the mood I wanted now.  Just before serving, I added the tomatoes and peppers along with all the brown liquid that had accumulated in the bottom of the bowl.

The risotto was wonderful, the best I've cooked in months. 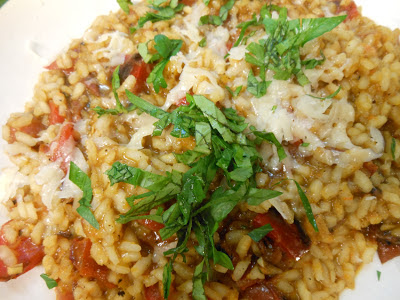 But there was still squash left.

Plus some leftover mashed potatoes from an intervening dinner.  Why not put them together for another leftovers du jour? 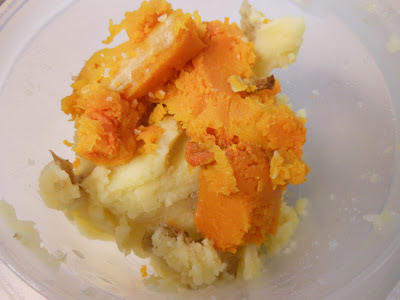 I mashed up the rest of the squash, added it to the potatoes, and mixed them up with two eggs.  Sauteed a half an onion, then added the vegetables for a frittata/potato pancake. 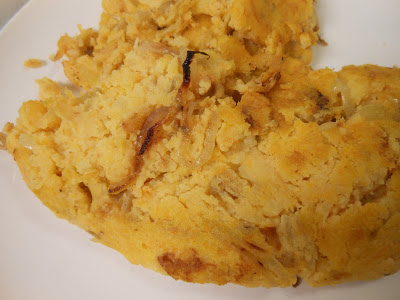 Some black pepper and a touch of nutmeg tasted good.  I thought of grating cheese over the top, but it seemed like overkill.  The squash gave the frittata a nice warm glow but if you hadn't known that was the secret ingredient, you probably wouldn't have identified it.

Should I quit while I'm ahead and stop cooking leftovers for a while?  All I can say is that our fridge currently holds none and we are feeling exceptionally well fed.
Posted by Kathleen Loomis at 4:47 PM 1 comment:

I mentioned in my last post that I wanted to try making steelcut oatmeal in my rice cooker, supposedly a foolproof method.  I had a different result.

I measured out my regular quantity of ingredients: 1 cup oats, 4 cups water.  I usually make this in a saucepan somewhat smaller than my rice cooker bowl, so I thought it would work out OK.  But when you cook it in a pan, you watch and turn the heat down when it reaches a boil.  The rice cooker knows better, and just boils away till it thinks the food is done.

Unfortunately, as the oatmeal boiled, it boiled right out of the cooker.  Yuk. 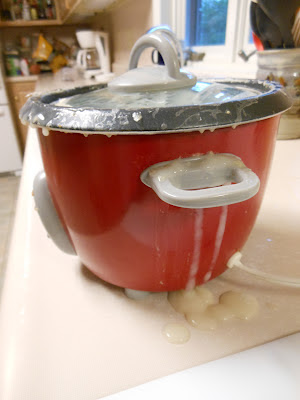 I wiped up the mess and somehow finished cooking the oatmeal, which never achieved the proper texture.  Too bad I wasn't doing collage that day, because the goo was a wonderful paste, very difficult to get off the counter even with serious tools.

I don't know whether this was my fault for using too much oatmeal, or whether it happened because the cooker stayed too hot too long.  Also don't know whether I'll even bother to try again.  Steelcut oats take about 45 minutes to cook and I like to make four servings at a time (on subsequent days I heat them in the microwave).  Don't think it would be worth the time and trouble to make smaller batches in the rice cooker, since I can easily make four servings in the good old-fashioned pan.
Posted by Kathleen Loomis at 11:24 AM No comments:

Rice cooking -- without any hard work

So I made snide comments last week about people who can't cook rice.  In the spirit of improving everybody's lives, let me talk a bit about the helpless cook's best friend -- the rice cooker. 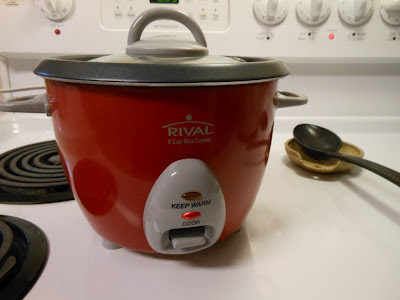 You've probably seen rice cookers in Asian buffet restaurants, big industrial models that do 30 or 60 or 100 cups at a time.  They're available for home use too, in any size appropriate to your family.  My cute little cooker produces two big servings at its smallest quantity, and goes up to six or seven at maximum capacity.

You measure out some rice into the little cup, then fill up the pot with water to the line.  If you used one cup of rice, fill up to "1" and if you used two cups, fill up to "2."  I usually do a can of chicken broth instead of water, which brings the liquid level up above the "1" line, so to compensate I use a bit more rice.  Add a bit of butter or olive oil, and in return the cooker will produce a nice browned crust on the bottom.

After several years of just cooking rice, I've learned to experiment with adding new ingredients as seasoning (one of my favorites is salsa), although I haven't yet gotten to the point of using the cooker to make things like chili or stew.  I have also gotten good results by replacing some of the rice with other rice-like substances such as orzo, quinoa or lentils.

I like my rice on the wet side, like risotto, so often when the cooker flips over to "warm" I'll add a little boiling water from my electric kettle, stir it in, and cook a minute more.

My cooker also includes a steamer basket so you can cook your broccoli or whatever at the same time as your rice, without throwing them all into the same pot.

Probably the greatest rice cooker aficionado is Roger Ebert, the former movie critic (Siskel & Ebert) who took a blog post and expanded it into a book.  His theory is that you need no other cooking mechanism to achieve nirvana -- "the Pot" can do everything.  He endorses its use in the office, in the dorm, in the attic.  I haven't read the book but I am persuaded that I should be more adventurous in my cooking adventures.  My next experiment, following Ebert's lead, will be to make steel-cut oatmeal in the cooker.

With this handy kitchen appliance -- mine cost considerably less than $20, as I recall -- you could theoretically live your life without a stove.  Not sure I want to go that far, but I'm intrigued by how far I can push its capabilities.