Caramelize your troubles away

So what do you do when your fresh tomato tastes more like styrofoam than tomato?  Or when your  apple has a mushy texture?  Or when your red pepper is bland and insipid?

Sometimes you know from the start that the produce is going to be underwhelming, such as when you buy supermarket tomatoes in winter.  Often the sinking feeling comes when it's too late to do much about the situation -- you've already sliced the pepper, or bit into the apple.  But you aren't so disappointed as to throw the food away.

This is the moment for the frying pan!  Whatever meager, pathetic juices and flavor that vegetable or fruit may have can be maximized by heat and some oil or butter.  After everything caramelizes, you'll have a concoction far more delicious than you ever dreamed could emanate from such a sorry beginning.

For tomatoes, slice or quarter them and put them into a hot skillet with olive oil, then cook on high heat a couple of minutes longer than you think is wise.  (Put a spatter guard over the skillet to keep the stove clean.)  The tomatoes will get really brown, and maybe even borderline charred, but that's OK.  Turn them and do the same to the other side.

If the tomatoes give off so much juice that they're starting to stew rather than saute, pour it off into a cup and set it aside.  Finally, all the edges have been nicely browned and the tomato has gotten very soft.  At this point deglaze the pan with a little marsala wine or sherry and turn the heat down while the wine reduces to a rich reddish-brown sauce. 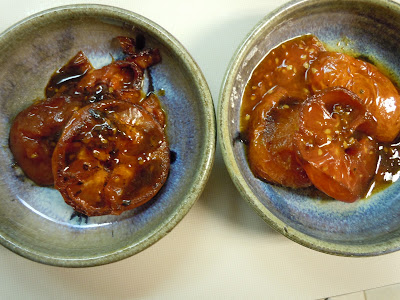 The tomatoes can be served as a side dish, or stashed in the fridge for a future pasta, risotto or soup.  If there's extra juice in the cup on the side, it can be added back or saved to be a cooking liquid.

I like this cooking method so much that I'll buy tomatoes from the supermarket all year, knowing they won't be fit to eat raw, but knowing that they'll cook down to a delicious ingredient.  It's also possible to cook a large quantity of tomatoes with olive oil in a pan in a hot oven, for instance if you are the lucky recipient of a windfall from the garden.

For peppers, either red or green, saute them in olive oil over high heat until they're browned on all sides, maybe even hitting the borderline of charred.  If the pieces are large, use the spatula to push the curved parts down flat against the pan.  I like my cooked peppers limp, so I'll turn the heat down and let them keep cooking on the back burner for a while, but you might like to take yours off the heat while they're still on the crispy side.

You can also cook peppers under the broiler (you don't need to use oil this way, although they're delicious served with a bit of olive oil drizzled on top) or if you have a gas stove, you can toast them over the flame like a marshmallow (never having had a gas stove, I cannot testify to this method but I have read about it many times).  With either method, cook until the skin chars (if it chars too much, you can peel it off).

Cooked peppers can be served as a side dish or saved to go into a sandwich or onto a pizza.  I usually think they're too assertive to make good soup vegetables, but love them in pastas and risotto. 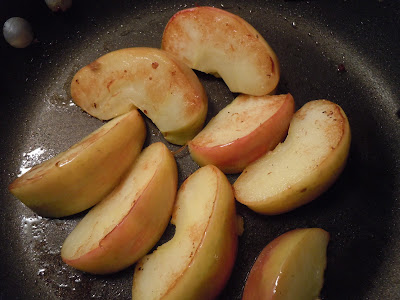 For apples or pears, saute them in a skillet with butter, getting all sides brown (but not brown/burned as with tomatoes and peppers). You can eat them at this point, or turn the heat down, cover the pan, and let them cook a while, maybe add a bit of orange juice, water, or wine if you want a fancy dessert.  A little nutmeg, cinnamon or ginger on top makes it special.

Of course, you can always turn disappointing apples into applesauce, but this is a nice alternative and works nicely when you have only one or two pieces of dud fruit instead of a bagful.
Posted by Kathleen Loomis at 11:51 PM