Every grandparent worth her salt enters into some kind of conspiracy with the kid that leaves the parents out of the loop.  In my case, it was funny that I had the same conspiracy with both my grandmothers.  I don't remember how it started, but probably one grandmother started it, the other heard about it and thought it was a great idea, and the rest was history.

The conspiracy had to do with sauerkraut.

Both my parents were picky eaters and it turned out that both of them loathed sauerkraut.  I know they both had to eat plenty of it in their good German childhoods, but by the time I came along they had put it behind them with a vengeance, announcing that not only did they not like the stuff, it stank up the house.  So when it transpired that I loved sauerkraut, both my grandmothers were thrilled.  Not only did it give them a way to coddle their little darling, it was a way to figuratively smack their own ingrate children in the face.

The conspiracy would begin when a grandmother knew I was about to visit.  Somebody would have gone down in the cellar and brought up a jar of home-canned kraut, then hidden it under a towel in the kitchen.  The instant my parents left the house, the car not even out of the driveway, the kraut was out of the jar and on the stove, stinking up the house.  If life was really smiling on me, there might be mashed potatoes to go with it. 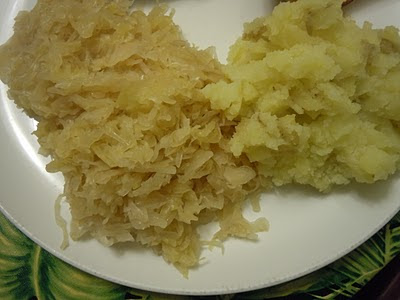 Since then, sauerkraut and mashed potatoes have been my ultimate comfort food.  For 18 years, my office was across the street from an old-style cafeteria, which had been in the basement of a downtown office building since 1920 or thereabouts.  All the ladies who served the food had also been there since 1920, I think, as had the tables, the chairs, the dishes and the little board with the white plastic letters spelling out the daily specials.  Nor had the menu changed since 1920 -- lots of vegetables, old-fashioned meat, three or four kinds of homemade pie, and mashed potatoes every day.

These days, I've retired from that job and the cafeteria has closed.  When I need comfort food I have to make it myself.  And Dad was right, it sure stinks up the house.
Posted by Kathleen Loomis at 11:24 AM