My good friend Bette Levy, whose art repertoire includes embroidery, crochet, quilting and mixed media, has a solo show at the Carnegie Center for Art and History in New Albany IN, through April 28.  One of the works on display is an assemblage of shopping lists, sewed together and waxed. 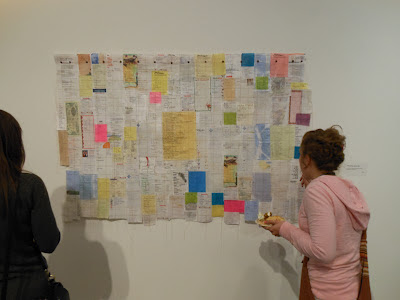 While Bette was working on this piece she asked her friends to contribute shopping lists, and since we are inveterate listmakers in our household, we had plenty to give her.  In fact, a favorite family story concerns a jerk neighbor whom my husband ran into at the grocery store.  The neighbor noticed Ken's list and sneered that he and his wife never use lists; they just walk up and down the aisles and buy whatever they want!!

Imagine my surprise to see Bette's finished piece in the museum and find so many of our own lists as part of it. 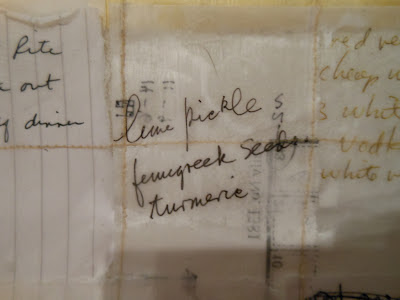 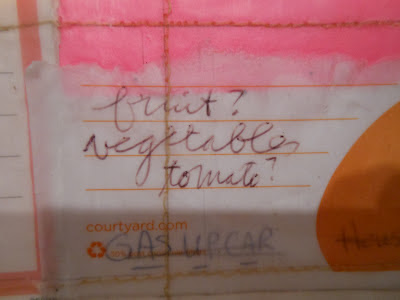 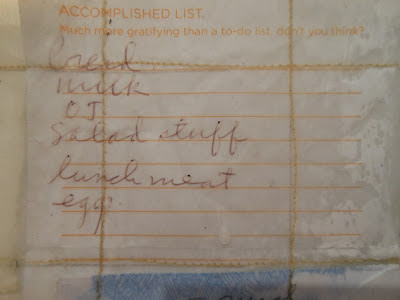 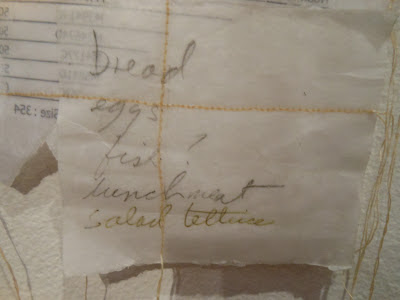 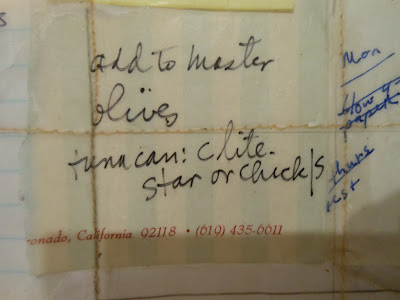 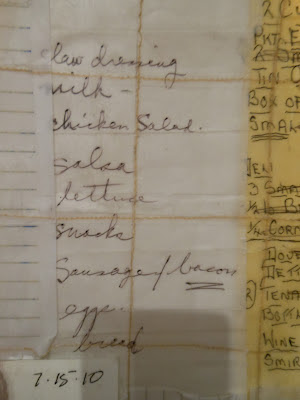 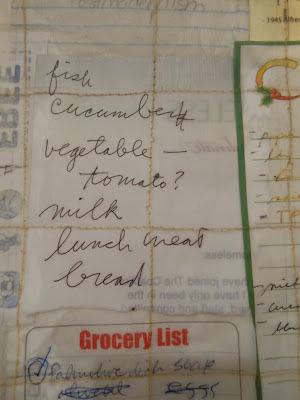 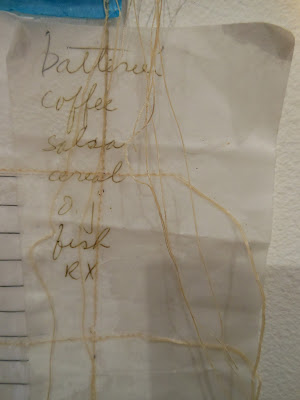 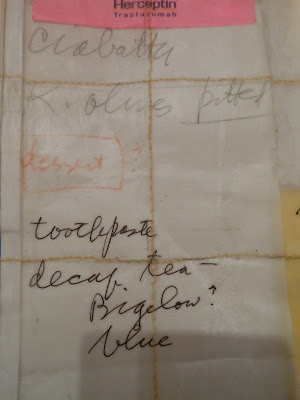 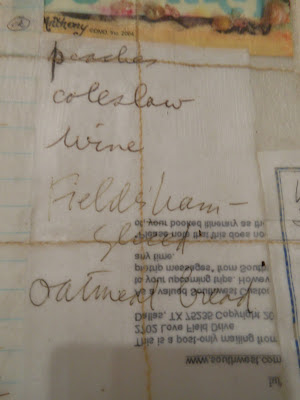 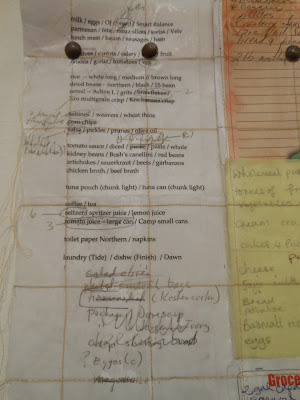 Posted by Kathleen Loomis at 9:27 PM No comments:

My usual complaint about modern retailing is overpackaging -- wrapping the bread in cellophane inside the plastic bag, sealing things inside that awful clamshell armor.  But today my thoughts turn to underpackaging.

I did my best to open the new box of cereal neatly.  Tried and tried to separate the edges of the bag without tearing it, but this was the best I could do.  I could have cut it open, I suppose, but that would have given me less bag to subsequently fold over inside the box. 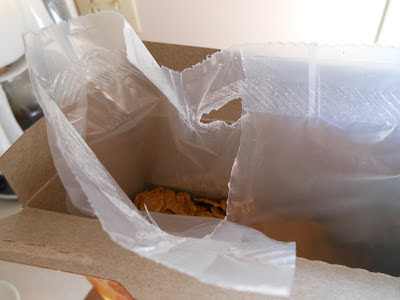 And for not the first time, I wondered why cereal doesn't come in a zip lock bag.

Looking at the first site that popped up on Google, I found one-gallon 10x12" ziplock bags at 7 cents apiece if you buy a lot of them, and I bet the buyers at General Foods could negotiate that down quite a bit.  Since the cereal already costs $3 or $4 a box, another nickel wouldn't seem to be a dealbreaker.

I would gladly pay the nickel if the box read "seal the goodness in with our exclusive zip lock packaging!!!"

Maybe I need to decant my cereal into my own zip lock bags.  I have long kept such bags in the kitchen for frozen waffles, another product that cries for better interior packaging.  Am I the only one who hates torn bags and escaping food?
Posted by Kathleen Loomis at 11:24 AM No comments:

Email ThisBlogThis!Share to TwitterShare to FacebookShare to Pinterest
Labels: packaging

A reader wanted the recipe for his favorite dish at a local restaurant, and the food guy obligingly printed it. The photo looked delicious, so I read the recipe.

It was an appetizer, chicken in puff pastry.  As I read this list of ingredients I wondered if this recipe served four, but no, it was for one.

Ingredients included 4 ounces of chicken breast, 1/2 cup broccoli, 1/2 cup mushrooms, 1/2 cup diced tomatoes, and of course puff pastry.  Then some cream sauce, one serving of which seems to contain 4 ounces of heavy cream among other caloric things.

No wonder the reader finds this recipe "unforgettable."  It has enough food in it for an entree, with a bit to spare.  But I suspect he orders a main course too.  So why are Americans overweight?
Posted by Kathleen Loomis at 10:01 AM 2 comments:

I love the olive bar at my local grocery, especially since they've expanded to include other antipasto-type goodies.  Can't always get away with it when men are wanting dinner, but if it's just ladies for lunch you can assemble practically your whole meal right there. 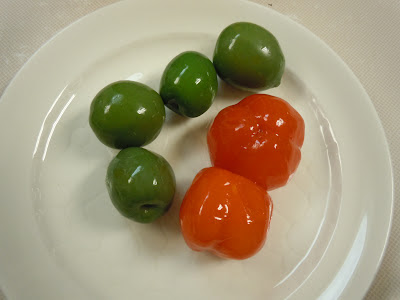 And how can you beat this gorgeous plateful?  The red guys are little peppers, not as hot as jalapenos or other heavy-duty varieties, but with enough bite that you know you've eaten something special.
Posted by Kathleen Loomis at 11:17 PM No comments:

May I have the envelope please --

I had made a red sauce/ragu for pasta earlier in the week but there was about a cup and a half left over.  When a beautiful huge eggplant appeared in our kitchen, it was time for creative improvisation.  I waited too long in the afternoon to do my classic eggplant parmigiana, which starts by nuking the whole eggplant in the microwave, then assembling a casserole and baking it.

So I sliced some of the eggplant and sauteed it in olive oil in a skillet.  I chose an ovenproof skillet thinking that I might finish the dish under the broiler without having to decant it.  But then I figured out an even simpler way. 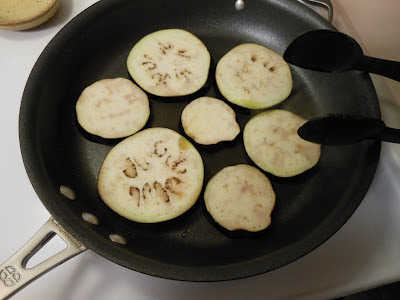 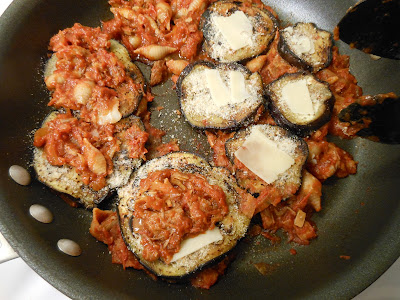 I covered the top of the slices with breadcrumbs and a bit of parmesan cheese.  (If you don't want to get out the tools for grated cheese and risk it going all over the counter, just use a vegetable peeler and shave off very thin hunks of cheese.  Much faster, and it's going to melt anyway.) 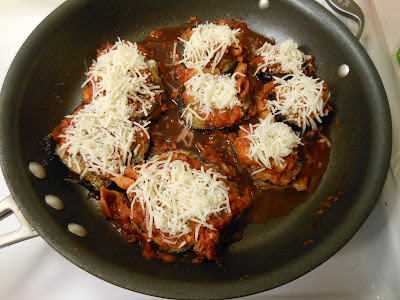 Then I spooned the other half of the leftover sauce on top of the eggplant, and topped that with some leftover shredded mozzarella.  Perhaps you wonder about those pasta shells -- they were left over too, mixed in with the red sauce.  Not enough to really count as a carbohydrate, but once the cheese got melted over the top we didn't even realize they were there.

Since the sauce was cold I knew it would have to stay on the stove for at least several minutes, and I was afraid it would dry out or even burn.  So I poured some red wine in the bottom of the pan. 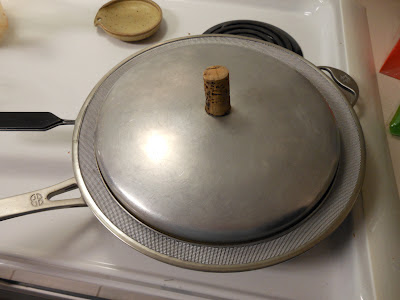 The skillet was too wide for any of my large pot lids, so I put the biggest mesh spatter guard over the pan, then perched the biggest lid on top.  It didn't seal the pan, but certainly helped keep the heat in.  Eight minutes later everything had heated through, the cheese was melted and it was ready to eat, with only one dirty skillet.  The wine had cooked away, leaving the red sauce hot but not very wet.  In fact, this dish had exactly the consistency of the best restaurant parmigiana. 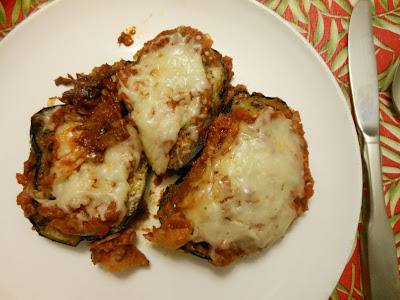 We rated this dish about as high as you can go, which was nice because I made up every step as I went along. If I had to write up an ingredient list, most of them would show the quantity "as much as you have."  Not sure the stars (and the leftovers) will ever be in this conjunction again -- will we ever get to do it again???
Posted by Kathleen Loomis at 1:04 PM 2 comments:

Email ThisBlogThis!Share to TwitterShare to FacebookShare to Pinterest
Labels: improvisation

My husband always has a pickle with his lunch.  He swears it keeps him healthy.   But not just any old pickle -- he likes them hot.

He used to buy a jalapeno dill concoction which was great.  But the product police found out about it and directed the company to stop making it.  Now what?

He stewed about it for a while and decided to make his own.  He buys plain old kosher dills in a huge jar, thus making them quite cheap (always a plus when plotting revenge on the product police).  Then he repacks them in smaller jars with some kind of very hot substance.  Sometimes he just replaces the brine with the juice off a jar of hot peppers, but that only works if you have a jar of hot peppers. 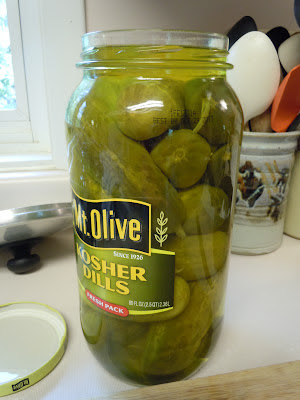 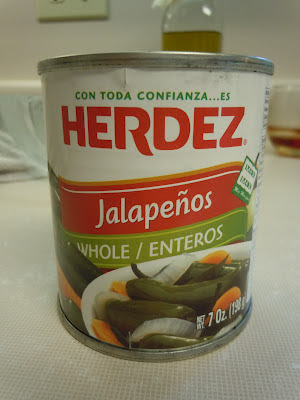 Here's his latest foray into remedial pickling.  He found a can of jalapenos at the ethnic market. 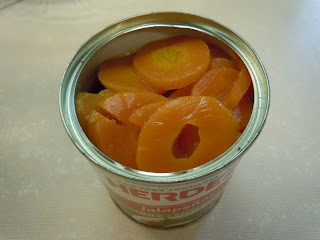 It turned out to have some unexpected ingredients besides jalapenos -- including a bunch of carrots.  We minced up the carrots and put them into a soup. 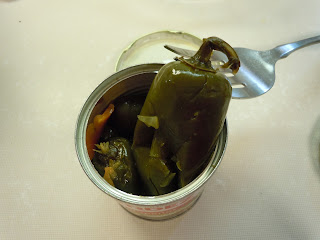 That left almost a full can of jalapenos.
We hauled out a stash of pickle jars (including one from the discontinued jalapeno dill spears!) and filled them about halfway with the new canned jalapenos, plus some hot peppers from our garden. 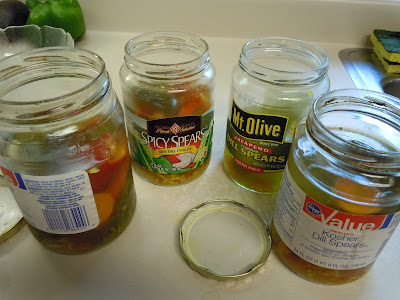 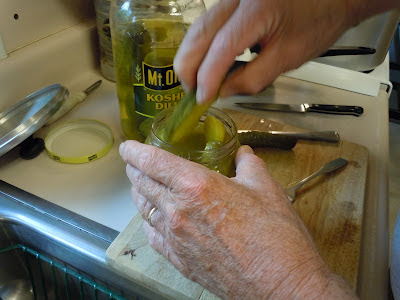 Pack new pickles into the jars, and let them steep in the hot juice for a few days.


We ended up with pickles just as hot as the ones we used to buy -- and a lot cheaper, especially if you count our labor at ten cents an hour.  Take that, product police!! 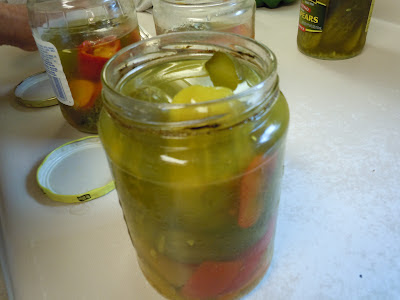 Posted by Kathleen Loomis at 6:10 PM No comments:

I've always loved chicken salad.  High on my food nostalgia list is the chicken salad sandwich from the old Stewart's Tea Room in Louisville, one of those gracious dining spots in old-fashioned department stores where little old ladies would stop for a bite after a hard morning of shopping.  Younger women like me who worked within a couple of blocks of the store would also pop over for lunch when we needed some comfort food, and if we really needed comforting we might stop at the candy counter on the way back to the office and buy one piece of chocolate apiece for dessert.  (Men wouldn't be caught dead in the place.)

But low on my food nostalgia list are a lot of chicken salads I've ordered with mystery ingredients and strange dressings that made me think "never again."  I don't like pickle relish in my chicken salad, nor raw onions or carrots or dried cranberries or raisins, nor chow mein noodles, nor so much watery miracle whip that it  turns your toast soggy and runs down your face when you bite.  And I'm sure I've repressed a lot of other strange things that I've eaten under the guise of chicken salad.

For many years I've indulged myself in a container of chicken salad from the ready-to-eat counter at Kroger on days when I need a little something special, like on the way home from the hospital after outpatient surgery.  Kroger used to make two kinds of chicken salad, one with artichoke hearts and one with red grapes.  I much preferred the artichoke version, so of course they quit making it.  The grape version is OK, although I practiced delayed gratification and immediately ate up all the grapes so I could enjoy the rest of the salad unadulterated.  The salads from other groceries, many of which I bought and ate in my car in the parking lot or in motel rooms, were sometimes good, sometimes less so.

For some reason it had never occurred to me to make my own chicken salad, until I found myself with a three-pound pack of boneless breasts, only a half-pound of which were needed for my culinary emergency.  What to do with the rest????

I decided to poach them and turn some of them into salad.  There was celery in the fridge, and mayo, and this bare-bones recipe turned out to be the best chicken salad since Stewart's Tea Room closed its doors decades ago.  And best of all, there was enough for a couple of lunches and a couple of  breakfasts. 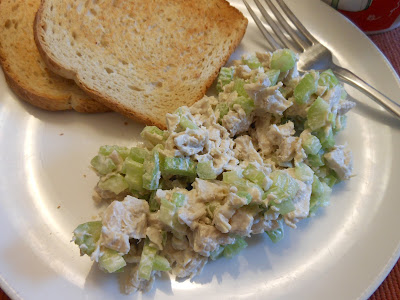 I was pleased at how quickly the chicken cooked (maybe 20 minutes at a simmer) and how easy it was to assemble the salad.  But three-ingredient recipes are always pretty easy.  Sometime in the future I might add some chopped walnuts, or mix some pesto in with the mayo, or add lettuce to a sandwich.  Or maybe not.  Plain was just about perfect.
Posted by Kathleen Loomis at 5:37 PM 3 comments: