TMF (too much food)

Ordered a patty melt at an Italian restaurant, expecting a nice hamburger with onions and cheese.  And that's what I got -- along with enough bread to make a second sandwich.  Half that amount would have been quite nice, although they did a clever job of cutting the meat in two and spreading it out. 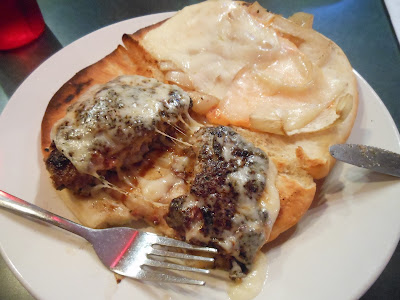 Posted by Kathleen Loomis at 7:48 AM No comments:

Email ThisBlogThis!Share to TwitterShare to FacebookShare to Pinterest
Labels: restaurants, too much food 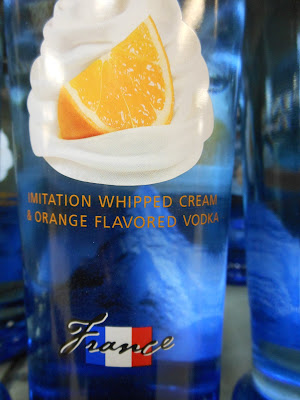 For people who want to get plotzed without having to taste any actual liquor. 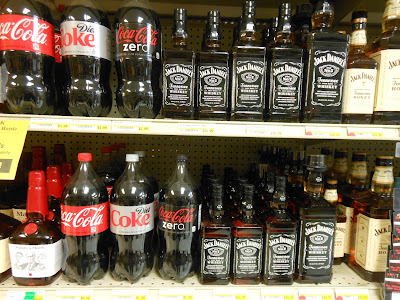 For people who want to drink seriously expensive liquor without having to taste any actual liquor (or walk to the other end of the store before checking out).

Posted by Kathleen Loomis at 7:49 PM No comments:

Email ThisBlogThis!Share to TwitterShare to FacebookShare to Pinterest
Labels: drinks

Kale is one of the healthiest foods on the planet -- all that dark green fiber, rich in Vitamins A, B, C, minerals, antioxidant flavonoids and other good stuff.  I like to eat it, but not cooked.  I loathed cooked spinach as a kid, have barely been able to get by that prejudice as a grownup, and don't like anything that even reminds me of it.

So every now and then we buy a big head of kale and I search for ways to incorporate it, raw, into our menus.  This head was getting toward the end, having performed yeoman duty in a couple of soups.  It also showed up as an additive to mashed potatoes (chopped, stirred in just before serving). 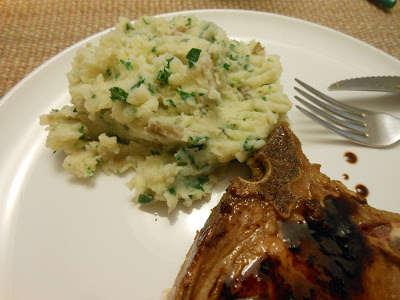 Then I came upon it one night when I was putting some rice into the rice cooker and decided that the same approach that worked for spuds might work here too.  Just before serving, stirred the green shreds into the rice. 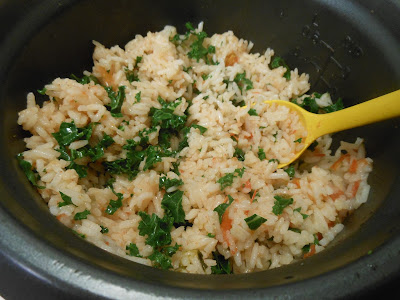 Since I had cooked the rice with salsa it had some red stuff in it already, so the deep green made a colorful Italian-flag display.  It tasted great, and the warmed-over leftovers made a good breakfast.

In the fridge: a slice of leftover eggplant, sauteed for dinner the night before.  I could have put it on a plate and eaten it warm or cold, but then what would have been my second course? 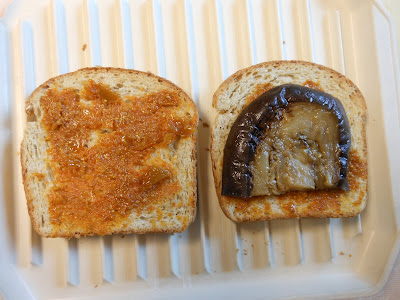 So I made some toast, spread each piece with hot Indian lime pickle, divided the eggplant in two, and put some cheese over the top.  A zap in the microwave, and it was a highly satisfying lunch. 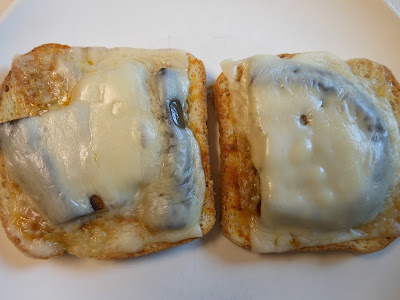 Posted by Kathleen Loomis at 12:05 PM No comments:

We like to eat fish, but I am an unimaginative cook in that department.  I don't deep-fry things, so that leaves out all the battered preparations that are so delicious in restaurants.  I usually buy only fish that I can confidently broil or pan-saute, so that means our home repertoire is largely limited to salmon, tuna and trout.

My husband got crabby about that recently and started nagging me to try some new kinds of fish.  In fact, he came home from the grocery with a big hunk of cod.  When I whined that I wouldn't know how to cook it, he sat down with the new cookbook he gave me for Christmas (Mark Bittman's "How to Cook Everything: the basics") and found a recipe.

So I followed the recipe, which had an intriguing technique: you chop up a big pile of vegetables (I used zucchini, peppers, onions, tomatoes, black olives and garlic) and saute them in a big dutch oven.  Then you lay the fish over the top of the vegetables, cover the pot and let it cook for five to ten minutes over a low heat.  In effect, the vegetable juices steam the fish.

Sure enough, the fish was cooked perfectly.  When I was serving out the plates I decided to just pile the green beans, cooked separately, on top of the other vegetables rather than get another dish dirty. 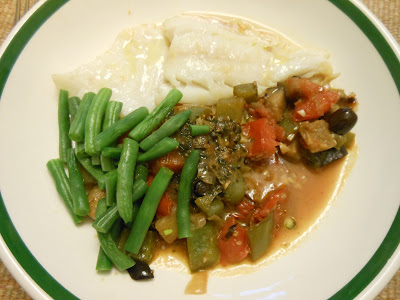 The verdict from my husband was that the fish was fine.  The verdict from me was that it would have been better with a quarter-cup of hollandaise sauce.  I thought the cod was just too delicate a fish to have much character when fixed this simply.

I've written before about our love for salmon, and how we avoid farm-raised for reasons of taste, health and sustainability.  So we were pleased to discover several sources of frozen wild-caught fish and decided to buy several and check them out.  I've gotten spoiled with our fresh fish counter at the grocery and have gotten out of the habit of buying frozen, but it's always nice to have something in the freezer for last-minute meals.

So last week we were checking out sockeye from Trader Joe's.  The first thing I noticed was the sheer quantity of food -- almost 14 ounces of fish, in two pieces clearly meant as dinner for two.  Nutritionists recommend a 3-ounce serving of meat or fish, reminding us that we eat way too much protein when left to our own devices.  So this package should really be dinner for four. 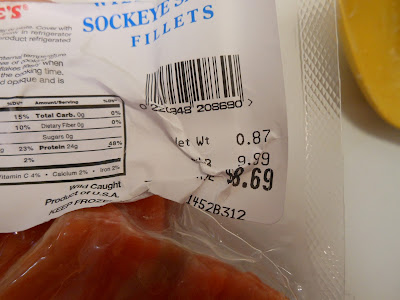 Fat chance, when you defrost two pieces of fish for your two-person family.  Of course you're going to eat it all.  It's probably too much to ask that the grocer should package fish in 3-ounce chunks -- Americans are too used to larger portions to go along with that size.  But perhaps they could try for five or six ounces?

The second thing I noticed, after the fish was thawed and I opened the package, was that the two pieces of fish didn't match. 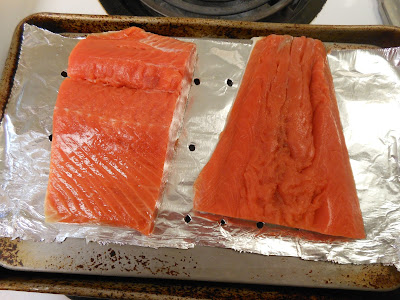 One was a thick cut from the center of the fish, the other was a thin cut from the tail.  No matter how you cook it, the tail piece is going to be done a couple of minutes before the center cut.  I debated starting the fat piece first and adding the thin piece after a while, but that would have required another plate to hold the thin cut while it waited, and it seemed like too much trouble.  So one piece was a bit rare and the other a bit dry.

You know that this fish was processed at a huge facility with hundreds of fish on the cutting table at the same time.  So why couldn't a worker choose two tail pieces to put together, and two center pieces?  Maybe that would take two seconds more per package -- at $10 bucks an hour, you're talking more than a half-cent worth of labor!!!  I'd be willing to pay it.

By the way, the fish was excellent. 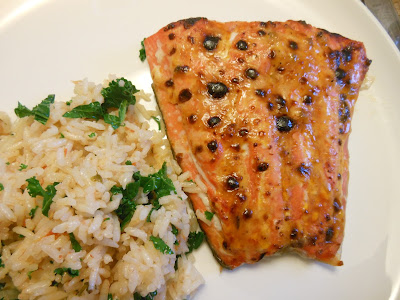