Last year we celebrated Thanksgiving early to accommodate my son's big fall vacation.   This year we did it again, again at the service of transcontinental travel -- but with a different twist.  My brother and his family, who live in Australia, were visiting, and I had the brainstorm to cook a Thanksgiving dinner for our big get-together. 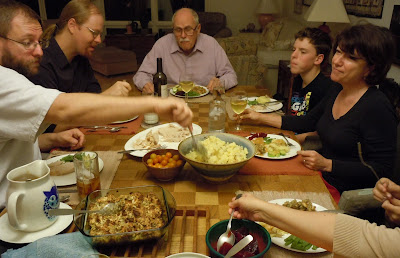 I know that they like to celebrate the holiday on its actual date with other US expats, but have a hard time finding the wherewithal to do so.  Turkey is not a popular food in Australia.  It's available in winter, but in summertime, people aren't all that thrilled about having the oven on all day for a traditional roast, even at Christmas.  To get a whole turkey in late November requires a special order and you can pay $10 a pound or more.
So we did the full Monty with a 24-pound turkey (so big it almost overflowed my huge industrial-strength roasting pan), stuffing, mashed potatoes, eight cups of gravy, cranberry sauce, green beans, and of course zucchetta and fresh tomatoes, not often seen on Thanksgiving menus.  For dessert, a choice of mincemeat pie or watermelon.

And for days afterward, turkey sandwiches.  They got on the plane satisfied.  And we get to do it again in just a few months!
Posted by Kathleen Loomis at 5:54 PM No comments:

Small fish in a small pond

I read an interesting story this morning about fish, yet another piece of evidence in the case against eating too much (if you hadn't already come in with a guilty verdict).  Seems that farmed fish grow much more efficiently when they're young, but as they get older -- and bigger -- they get more sluggish about converting their food to mass.

In other words, the bigger the fish, the more wasteful its use of resources.

So if you buy farmed fish, and you care about sustainability, and you want to put your mouth where your mouth is, go for the smaller fillets, not the big slab.  And as a nice side benefit, you eat less protein (which we rich Americans get way more of than we need) and have more room for vegetables.  Here's a nice plate of food that I think would get me good marks on that pop quiz, even if it is an all white/brown meal. 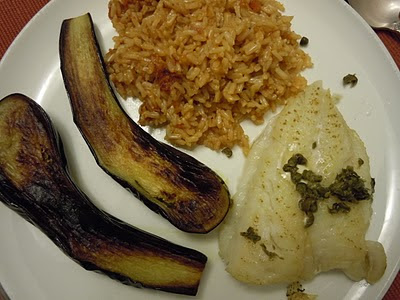 By contrast, if you are going for wild-caught fish, you should avoid the smaller ones, which often have not reached full reproductive capability.  Eating them would be shooting yourself in the foot, threatening future generations of fish sandwiches.

More to think about, if you weren't already ethically fraught by visiting the grocery store.
Posted by Kathleen Loomis at 11:12 AM No comments:

At the airport, I cleared the metal detector, put my shoes back on, looked for my bag -- and realized it was still under the X-ray machine with three solemn guys scrutinizing it.  Oh rats.  Sure enough, they had to do a bag check.

I figured I knew what they were looking for -- 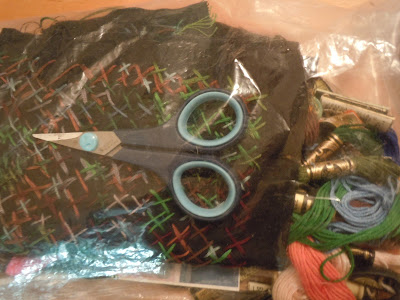 the small embroidery scissors.  I was ready to politely point out that TSA regulations allow scissors with blades less than four inches long.

But no.  What they found in the bag, and sent back through the X-ray, was this: 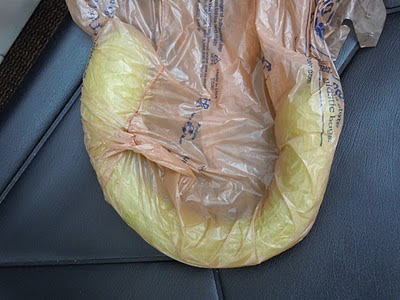 Yes, a zucchetta.  Sometimes when they grow too big we've considered using them as clubs, but never thought of them as TSA-certified deadly weapons.
Posted by Kathleen Loomis at 3:19 PM No comments:

Email ThisBlogThis!Share to TwitterShare to FacebookShare to Pinterest
Labels: zucchetta 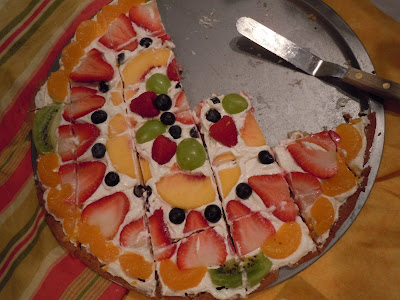 Don't you expect that food at an art reception will look like art?
Posted by Kathleen Loomis at 1:37 PM No comments:

On Friday I received my new copy of Fine Cooking, a magazine that I generally love.  But it did nothing to raise my spirits this time.  Outside it was 102 degrees and inside we were dragging around, thankful for air conditioning but too hot and cranky to want anything but watermelon for dinner.

But for Fine Cooking, it's Thanksgiving!  Yes, this is the October/November issue, never mind that it arrived on September 2.

Haven't these people heard of immediate gratification?  There was nothing in the magazine that I even wanted to think about until the temperature drops 40 degrees.  Besides roast turkey, we got articles on brussels sprouts, chili and beets.  By the time fall actually comes, this magazine will be long disappeared into my piles of lost ships.

While I was leafing through the magazine I came upon a recipe that mystified me.  It called for "1 tsp. green cardamom pods, cracked, black seeds removed and pods discarded."  What's left?
Posted by Kathleen Loomis at 10:10 PM No comments:

Email ThisBlogThis!Share to TwitterShare to FacebookShare to Pinterest
Labels: seasonal

Garnish your way to happiness

The other day I had some friends over for lunch and had chopped up a handful of parsley to put on top of everybody's bowl of soup.  Which I did a lot more obtrusively than I had planned, since I forgot to do the garnish as I dished out the bowls, and so had to bring my little green bits to the table and strew them into the soup in full view of everybody.  Not the savoir faire one expects from a world class chef.

My friend Felice, while waiting for her parsley to be sprinkled, told a great story about a young friend who just happens to be a world class chef, or at least a guy who owns three restaurants, which is pretty accomplished in my book.  Some time ago he was chatting to her family about his life in the food biz, and announced, "Chicks dig guys that garnish."  That remark impressed the family so much that it became a mantra.

My son the cook might appreciate this concept, except that his wife and daughter are already sufficiently thrilled by the simple fact that he cooks, let alone garnishes.  And my unmarried son the non-cook, whose fridge hasn't held actual food since he bought the house seven years ago, wouldn't know a garnish from a radish so I won't even bother passing it along.

I'm not that hot on garnishes per se, at least not the kind you find in restaurants, which often strike me as gratuitous, if gorgeous.  For instance, you're not going to eat the leaf out of this magnificent bento box. 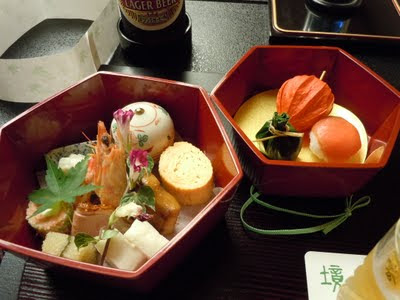 But I do love parsley, for its taste as much as for its greenness.  We're having a good crop of it this year, and it's such a pleasure to keep a bouquet on the kitchen counter ready for improving whatever I'm cooking.  In a bit of water, it will keep for days, thus sparing me a trek into chiggerland in the 100-degree heat. 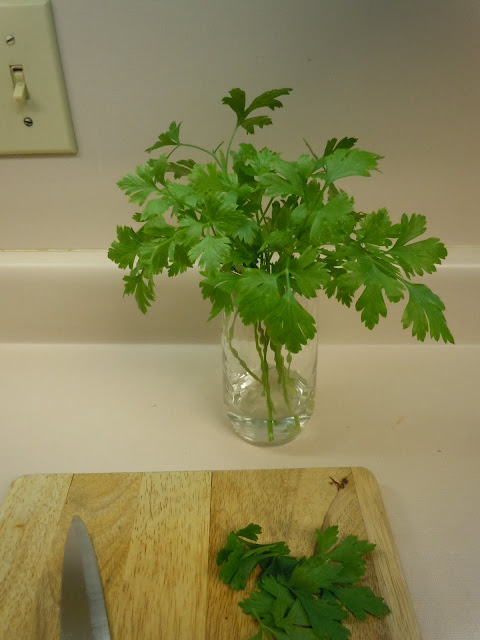