We had the Ironman Triathlon today, and I happened to be wandering about near the refreshment stand shortly before the first competitors ran past.  Perhaps you wonder what kind of portable food is available for athletes who start a race at 7 am and may not finish until midnight: not just ice water or Gatorade, but lunch and maybe even dinner. 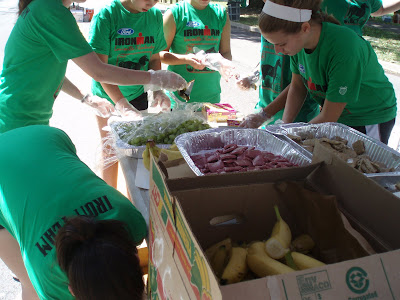 Here's what I saw:

Bananas and grapes.  Pretzels and cookies.  Power bars (the volunteer confided, "Looks like mystery meat to me!").  Several kinds of drinks, including cola.  Not a bad spread, but I wonder how you run and peel a banana at the same time? 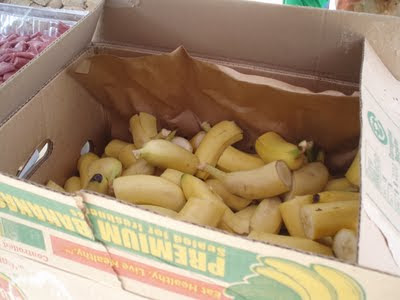 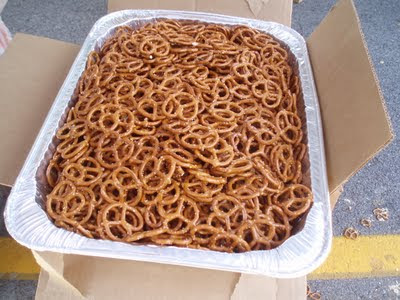 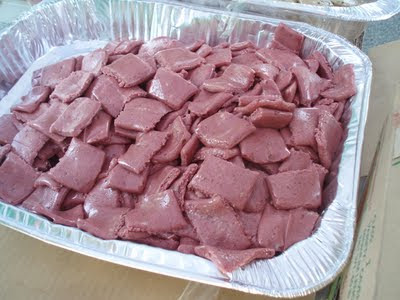 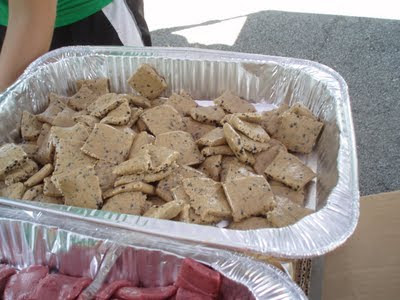 Posted by Kathleen Loomis at 8:41 PM No comments:

Email ThisBlogThis!Share to TwitterShare to FacebookShare to Pinterest
Labels: bananas

A glimmer of hope from the garden

We've been having a lousy year in the garden -- still only a couple of tomatoes and zucchetta instead of the huge bounty that you're supposed to have in August.  A week ago we scored big -- my friend K got sick of me whining about my tomatoes and brought me a huge haul of goodies from her garden (and even a bit from her neighbor's garden). 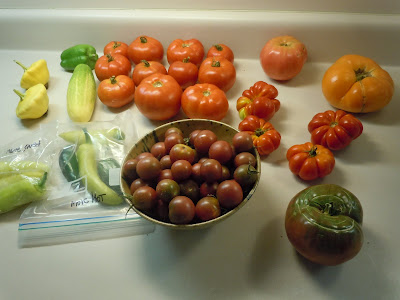 That got us through the week very happily, but now we're back to whining. 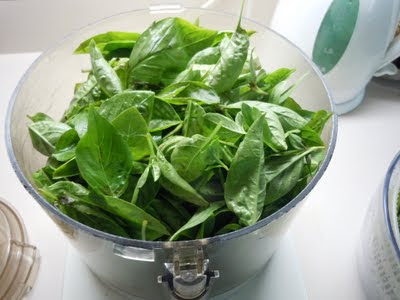 But we did have one good harvest: enough basil for a big batch of pesto.  I wrote last fall about how I process basil and freeze it.  It was nice to get a good pesto/pasta meal out of the garden, plus extra to put away for later. 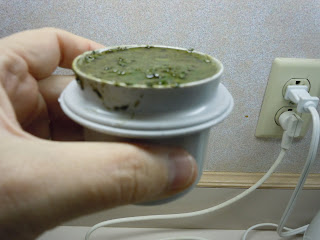 Posted by Kathleen Loomis at 1:50 PM No comments:

I told you last week that we were going back to the farmer's market, and that one of us would stand on the curb with TWO seeded watermelons this time.  That's exactly how it worked out, and the watermelon is excellent.  (Peaches and eggplant in the plastic bag were excellent too.) 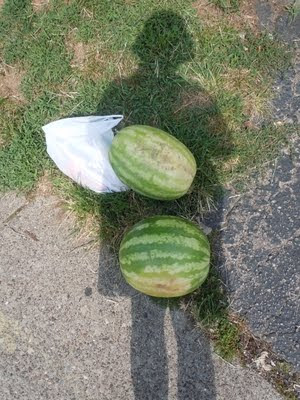 And we have our favorite Chinese buffet, where we go to eat vegetables.  Or at least we used to.

I've always been proud of my resistance to fast/junk food; I am not tempted by a quarter-pounder or chicken nuggets, not fooled by the salad offerings, able to go years without an order of those marvelous McDonald's french fries.  I guess my fast/junk food susceptibility has been transferred to the Chinese buffet.  When we're on the road, searching for a place to have lunch in an unfamiliar town, we always go for the Chinese buffet over the Burger King, and at home, when we feel the need for a lot of vegetables prepared by somebody else, we always go to Jumbo.

I know that Chinese food can be bad for you if you try.  Some dishes have a lot of fat, especially faux-Chinese stuff like crab rangoon, egg rolls and fried rice.  White rice isn't particularly nutritious.  But we've always believed that if you go for the vegetables, and pass up the sweet-and-sour pork, you can eat a fairly nutritious meal at a Chinese buffet. 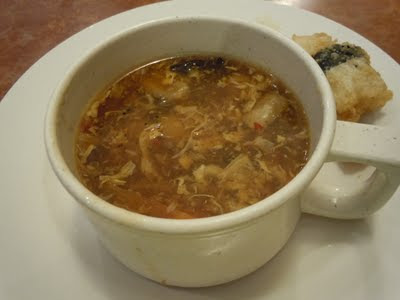 still the best hot and sour soup in town, and I didn't take any of the fried noodles

Our favorite Chinese buffet became our favorite because of the bok choy.  They always had a tray of baby bok choy, steamed without sauce.  You could put five or six of those little guys on your plate, bathe them with a little sauce from the Mongolian beef and a couple of bites of chicken, and chow down with maximal health benefit.  Most days there was a tray of sauteed green beans, and you could augment your plate by picking some cauliflower and onions out of the spicy chicken or the seafood delight. 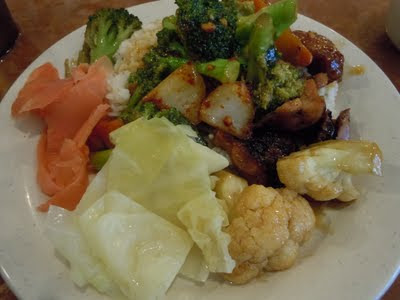 a healthy meal from the past

But we haven't seen any bok choy at our formerly favorite restaurant in months.  Last week there were no green beans either, and not even a tray of vegetables with tofu.  I took lots of broccoli out of the chicken with broccoli, but the meal was a big disappointment in terms of vegetables.

Meanwhile, what's on the buffet?  Pizza, mashed potatoes, fried shrimp, soft-serve ice cream, apple pie, non-Chinese food driving the vegetables out to pasture in the culinary equivalent of Gresham's Law.  We may well be on the lookout for a new favorite restaurant. 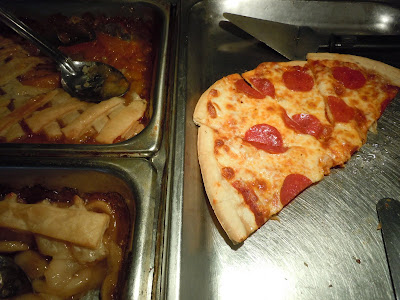 Posted by Kathleen Loomis at 7:07 AM No comments:

Look at this beautiful hunk of watermelon.  Look at the little black things scattered through it -- children, they're called seeds. 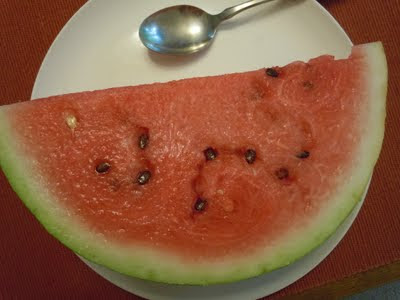 In the olden days, all watermelons had seeds.  Dealing with them was an integral part of eating the watermelon.  Perhaps you would swallow them, causing consternation among friends who thought you would die and/or get pregnant as a result.  If you were outside, you would spit the seeds into the undergrowth, perhaps in competition with your brother for who could get the most distance.  The world record seed spit, in case you don't follow that sport, is 75 feet 2 inches.

But today, seeds are becoming obsolete.  Who even knows these days why babies' swimsuits have black spots on the red?? 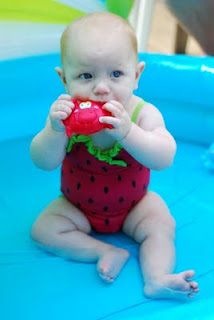 Even though seedless melons are more difficult and expensive to grow, they are taking over the world.  In 2003, 42% of the watermelons sold in grocery stores had seeds, but last year that was down to 16%.  Apparently people want to buy seedless because they serve melons cut up in fruit salad, not in a big hunk on the plate or in the hand.  High-end chefs like seedless too so they can serve melon in fancy preparations where seed disposal would be too time-consuming (if done by the kitchen staff) or low-end (if done by the diners).

Nevertheless, many foodies believe that the old-fashioned watermelon tastes better than the new varieties.  I agree with them.  For the last several years we watched the seeded melons disappear from our grocery store.  Some years we'd find only one or two loads of seeded all summer.  Curiously, the seeded melons were usually priced higher than the seedless, which makes little sense, but we'd buy them anyway.  Last year we found no seeded melons at all.  We'd occasionally buy a seedless melon but it was never as good as we remembered from the past.

Saturday we were at the farmer's market and asked, as we were checking out, whether the watermelons over in the corner had seeds.  The dark green ones didn't, but the striped ones did.  We took the biggest striped melon we could find, and toted it with some difficulty the long block to where we'd parked.  And it is magnificent!

By the way, I've heard people badmouth watermelon because of its high glycemic index.  Research, perhaps fueled by wishful thinking, led me past the scare stories and to the nutritionists who point out that yes, the carbs in watermelon are quickly absorbed into the bloodstream, but there are so few of them -- it's mostly water -- that your glucose level will barely stir.

So next week we'll be back to the farmer's market hoping for striped melons.  And one of us will stand on the sidewalk with TWO melons while the other one brings the car around.
Posted by Kathleen Loomis at 8:03 PM 2 comments:

I don't know what's going on with tomatoes but we're having a mysterious impasse.  Our plants have been full of green tomatoes for weeks, but they never turn red.  We had some Sun Sugar baby tomatoes early last month, but nothing since then.  Meanwhile our big tomatoes sit there, green as grass. 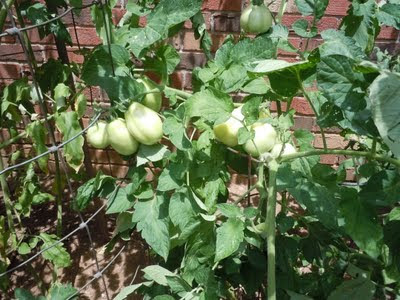 We've had plenty of heat and sunshine, which I thought were necessary for tomatoes (maybe we've had too much?).  We've had plenty of rain, which we don't always get in July. The plants have set fruit (often a problem in extreme heat) and the fruit has gotten big and beautiful.  But not red.

A few of the tomatoes ended up like this one, half-eaten on the driveway, ravaged by squirrels or chipmunks or some other kind of varmint.  If they'd just eat the whole thing I'd be less resentful, but no, they only eat a bite or two and leave the rest there to taunt us. 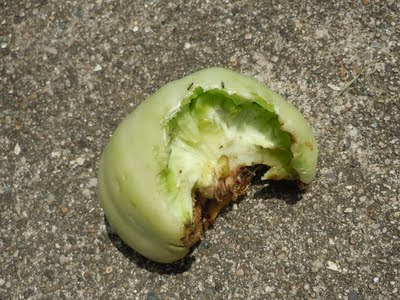 But most of our tomatoes are sitting there waiting for some kind of signal from the universe, and I've heard similar stories from other people.  Meanwhile my friend K is drowning in gorgeous red tomatoes and I'm jealous.  If not for the farmers' market we would be totally tomatoless.

I've usually thought of green tomatoes as a fall dish, when the vines are full but you know you'd better eat them before the killing frost.  Eating green tomatoes in July always seemed like shooting yourself in the foot -- it only postponed the moment when you got to eat the first wonderful red ones.  But I may have to change my plan this year.  If we don't eat them green, who knows when or if we'll be able to eat them at all!
Posted by Kathleen Loomis at 8:24 PM 2 comments: 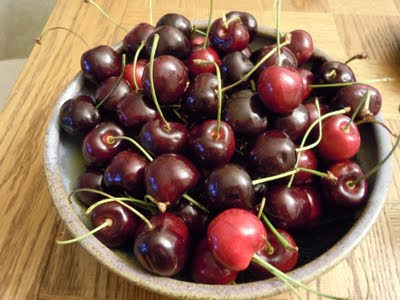 Email ThisBlogThis!Share to TwitterShare to FacebookShare to Pinterest
Labels: fruit 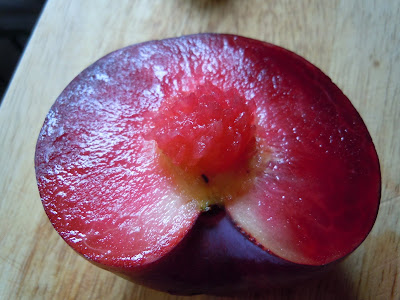 plum with a topknot
Posted by Kathleen Loomis at 11:32 PM No comments: