As cucumbers are starting to come into the farmer's markets, thoughts turn to pickles.  Our great-grandmothers all pickled up a storm in the olden days, putting up cukes that were a welcome source of fresh taste and Vitamin C through the winters.  I used to can pickles in my early self-sufficient-housewife days, in between baking bread, but decided not only that it was a lot of work, but the pickles weren't all that delicious.

Now when I get the urge to pickle, I'll make a small batch and stow them in the fridge rather than going through the big production with the boiling water bath and the sterilized jars and caps to render the stuff shelf-safe.  Pickles are more a taste treat for summer than a store for the winter. 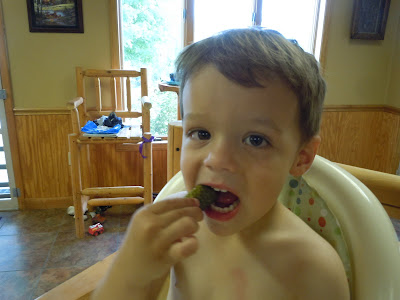 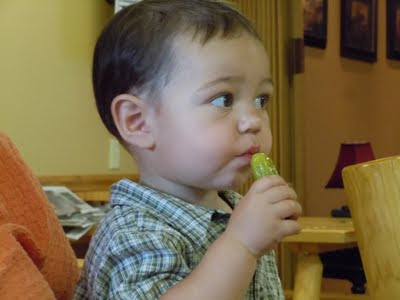 The best years of my pickling life came in the late 90s, right after my resident farmer spent a month in Poland.  He made friends with a local teacher who shared his gardening enthusiasm, and came home with two varieties of cucumber seeds, one from Poland and one from Belarus.  They grew enthusiastically in our garden, every day a new bumper crop, and were delicious.

When we got tired of eating them raw we might make a small batch of pickles.  I made up a batch of brine and used only what I needed for a jar or two of dills; the rest went back into the cupboard in an old milk jug or vinegar bottle until we needed it again.  Sometimes I might even reuse the brine for a second batch.

The pickles:  pack cukes into glass Mason jars, as tightly as possible.  With big cukes we might cut them lengthwise for a tighter fit, although that makes the pickles more sour.  Put a handful of dill into the jar; it's OK to use just the leafy fronds, or to add the flowers and stalks.  Add a half-dozen peppercorns and a clove of garlic to the jar.  Bring the brine to a boil and pour it into the jars to cover.  When the jars cool, cap them and put them in the fridge.  You can start eating the pickles as early as the next day, if you like them half-sour and crunchy, or keep them for weeks.

Alas, the European cucumbers petered out in a couple of years, despite efforts to save the seeds and replant.  Either our garden became infested with some kind of cucumber blight or the seeds lost their vigor.  Now we get our cukes from the market, but there's still plenty of dill in the garden in case we want to get into a pickle.
Posted by Kathleen Loomis at 10:14 AM