Last week we went to a hip, new restaurant for the first time and everybody drank beer.  There were six of us and at least five different beer selections, all excellent, lubricating our equally excellent conversation.  But at the end of the evening, the conversation took an edgy tone, as the checks came and we contemplated the widely varying prices of the beers.

This isn't the first time that we've been surprised at the price of beer in a restaurant.  While many places are willing to print the price of bottled beer on the menu, draft beers are customarily subject to mystery pricing, just like the special of the day.  I suspect this is a high-profit area of the business operation, because there's no other reason to avoid telling people what they're going to pay.

But if they did tell you, maybe you wouldn't order the medium-sized glass of high-end, high-alcohol craft brew for $8.25.  Or maybe after the first glass, you'd switch to the $3 less fancy (and larger) microbrewery draft, or even the Pabst Blue Ribbon.  Or maybe you'd order a bottle of wine instead.

It's a mystery to me why restaurants that put prices on the wine list won't do so on the beer.  And why customers put up with it. 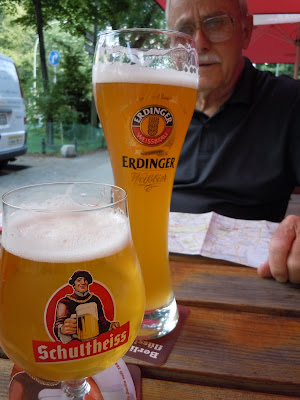 Posted by Kathleen Loomis at 6:49 AM