A chicken in every pot

Every now and then it pays to review your recipe files.  You may find something delicious that hasn't made it into your mental recipe file.  The other day I came across a chicken dish that I forgot I ever made, although I must have liked it enough to type it in to my cookbook document.  So I made it and yes, it was good enough for company.  You might like it too.

This is one of these dishes where you spend a half hour in the morning or early afternoon chopping and slicing and sauteeing, getting the stove and the counter and yourself all greasy, but then you leave it to simmer by itself while you wash up and take a walk or work on your quilts or read a book until dinner.  Particularly nice in summer when you want to get your hot work out of the way early in the day.

This is a recipe that doesn't require much measuring or precision, since I don't like either one.   I call it Chicken With Onions, Garlic and Lemon.  In addition to the name partners, you'll also need some fresh herb (I used rosemary) and some wine.  And of course you can substitute if you want, with broth instead of wine, olives or capers instead of or in addition to garlic, and whatever else might strike your fancy. 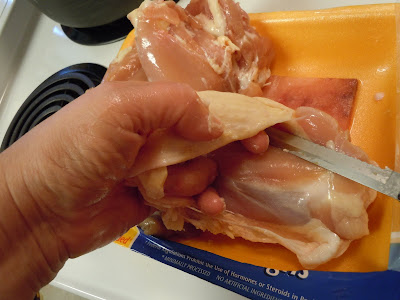 Start with a package of chicken thighs, although you could use other parts.  Strip off the skin and put it into a big covered pot or dutch oven over high heat until it has rendered off some fat in which you can brown the chicken.  When the chicken is nicely browned on all sides, take it out of the pot and put it on a plate.

Meanwhile slice two or three onions, which you will cook in the same pot after the chicken is out.  There should be a little fat left in the pot so the onions don't burn; if not, put the chicken skin back in for a bit and render off a little more.   Turn the heat down and let the onions cook for about 15 minutes till they get brown.  Stir every now and then so they don't stick.  Throw out the chicken skin.

While that's going on, dice some garlic.  I used five cloves and it didn't seem overwhelming, but we are garlic lovers; you may want more or less.   Finally, take the peel off a lemon and cut it into small pieces, cut the lemon into two or four pieces and remove the seeds.

Add the garlic to the pot when the onions are just about finished.  Then add a good schluck of marsala, sherry or vermouth to deglaze the pan, and stir everything around for a bit.  Lay a couple of big sprigs of your chosen herb on top of the onions, then put the chicken back into the pot, along with any juices that have leaked out onto the plate.  Rinse the plate but keep it around for a later step.  Squeeze the lemon into the pot, and throw it in, along with the peel. 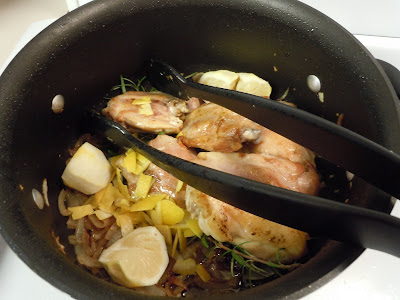 Now add about a cup of wine.  I used white, but red would do.  Cover the pot and adjust heat so everything is simmering.  Go away and have fun for at least two hours.

Then return to the kitchen and check whether the chicken is falling off the bone.  If it is, take each of the chicken pieces out of the pot and put on your work plate.  Separate the meat from the bones, and also pick out any nasty bits of gristle.  Put the meat back in the pot, and throw out the bones and other debris.  Also look at the lemon chunks; the pulp may have already cooked itself into liquid and disappeared, but if it hasn't, separate the pulp from the white pith, stir the pulp into the sauce and throw the pith away.

If you like, you could take the pot off the stove right now, stow it in the fridge and warm it up tomorrow.  Or put it back at a simmer and hold till dinner.

Do check every now and then  that the liquid in the pot hasn't boiled away.  You will want a good half cup or more of rich brown sauce to serve with the chicken, so if the liquid is getting low, augment with some water or chicken broth. 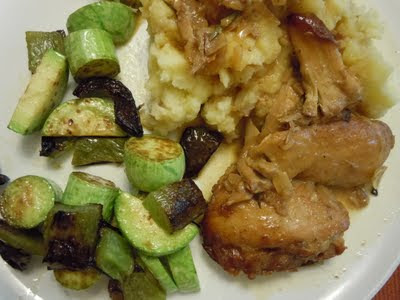 I had my sous chef make mashed potatoes to go with, but you could also serve with noodles, rice or bread.
Posted by Kathleen Loomis at 12:07 PM

Email ThisBlogThis!Share to TwitterShare to FacebookShare to Pinterest
Labels: chicken