In the ethnic market the other day we picked up a dozen bags of Goya dried beans in varieties that don't appear in our suburban grocery store.  Feeling flush and adventurous, I popped for a couple of bags that mysteriously cost three times what the others did -- what magic could they provide?

The most expensive of the bunch were red cargamanto beans.  I fell in love with the name; they seemed totally exotic.  When I did some research later, I learned that cargamanto is the name for an heirloom variety from Colombia, but its virtual twin is the familiar cranberry bean.  I'm not sure I agree -- my cargamantos were fatter, more cuboid than kidney-shaped, and dark red, unlike the paler, slimmer cranberry.

I planned to cook just the bag of cargamantos but absentmindedly put too much water in the pot, so I added a bag of plain red beans.  You can see the difference between the pale, plain, small red beans and the larger, far more beautiful cargamantos! 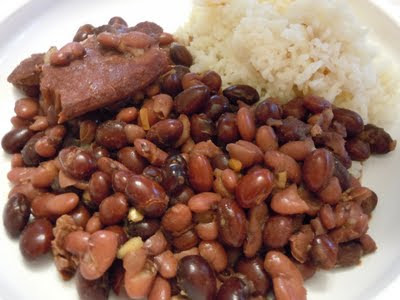 The traditional South American recipe for cargamanto beans includes a plantain, which you can either serve on the side or cook in with the beans and puree when it's done, stirring the goop back into the soup.  Not having a plantain on hand, I cooked mine as I would make black beans: with a hunk of pork, some ginger and a bit of barbecue sauce, as well as the obligatory garlic and onions.  Then I served it as I would serve black beans: with rice on the side.  We even had an avocado, which is another part of the traditional cargamanto meal, but we put ours in the salad rather than on top of the rice and beans.

I rate this bean a great success, even if it did cost $4 a bag.
Posted by Kathleen Loomis at 8:39 PM

Email ThisBlogThis!Share to TwitterShare to FacebookShare to Pinterest
Labels: beans