Corn off the cob

I don't remember why my mother started offering to cut the corn off the cob for her pampered family;  perhaps it was when one of us kids had loose teeth, but pretty soon it became a permanent menu option.  I am embarrassed to recall that I was always willing to have Mom do it for me, but in fairness, when Mom wasn't around not only did I do it for myself but I offered to do it for anybody else in sight.  In sharp contrast to my dad, who if Mom wasn't around made anybody else in sight do it for him. 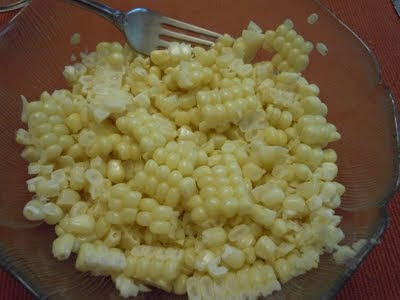 I've always been on the fastidious side when it comes to eating.  Given a choice between grabbing that barbecued sparerib or trying to cut the meat off the bone with knife and fork, I'll always try the silverware first.  I'll eat watermelon with a spoon and order ice cream in a cup rather than a cone.  I'll slice the peaches into a bowl in the kitchen and then wash up before eating.  I just don't like getting my hands wet, greasy and sticky at the table (next thing you know, that ick has transferred itself to your newspaper!).

My husband, on the other hand, likes his corn the traditional way, eaten off the cob.  So when the corn is ready, we enter into a choreographed kitchen ballet.  He gets the first ear out of the pot, dried off in a towel and outfitted with little plastic corn-shaped holders.  He applies butter, salt and pepper and then takes his plate to the table, where he starts right in eating.

Meanwhile I get the next two ears, slice the kernels into a bowl, and apply my own butter, salt and pepper.  By the time I get to the table, he's almost done eating his first ear.  While I eat mine with a fork, he returns to the kitchen to get his second ear ready.  Surprisingly, we often finish eating at almost the same time.

No matter which way you do it, eating corn is a big production, and we've decided it just doesn't mix with eating anything else.  If possible, we get the rest of the meal underway so that after the 10-minute corn course, what's left can be served out immediately onto clean plates.  If not, we take a brief intermission while the second course is prepared and served.

This has been the best corn year in our memory.  We've had excellent corn from springtime on, starting with the Florida crop and heading north.  Tonight we had local corn and it upheld the high standard of excellence.  My husband thinks that corn in general has improved, with new varieties, and that it's been better across the board for several years now.  I'm not so sure; I think this year has been exceptional thanks to some climatic perfect storm that may not happen again.  In either case, we're taking advantage of it.

PS -- there are lots of ways to cook corn.  My favorite is to cover the corn with about an inch of cold water, put a wire rack on top to keep the ears submerged, cover the pot and bring it to a boil.  After a minute of boiling, it's ready! Posted by Kathleen Loomis at 9:18 PM

Email ThisBlogThis!Share to TwitterShare to FacebookShare to Pinterest
Labels: corn