Carrot salad -- the easiest recipe ever


In a comment on my last post, Kristin asked about my carrot salad.  I am almost embarrassed to provide this "recipe" because it is so simple.  But you do need a Cuisinart (or a box grater and knuckle guards).

I fix this at least three times a month.  It's so good, and so easy.  It brightens up the all-white meal or the boring brown-and-white plate of meat and potatoes.  It's suitable as a side dish for dinner, or as breakfast or lunch with a piece of buttered toast.  Or as a snack, if you're trying to avoid junk food.

So get a pound of carrots, more or less.  Wash them and take off the tops and tails.  Cut them into one-inch pieces.

Cut a chunk of fresh ginger root about the size of a walnut.  Put it into the Cuisinart with a handful of carrot pieces and zzzz it until everything has been cut into small pieces approximately the size of grains of rice.  If the pieces are a little bigger that's fine, but don't let them get so small they turn into mush.

Add the rest of the carrots and zzzz them till they're in small pieces too.  Then turn everything out into a big bowl.  Add some olive oil, just enough to moisten the salad, and some lemon juice.  Mix everything up and taste to see if there's enough dressing on the salad. 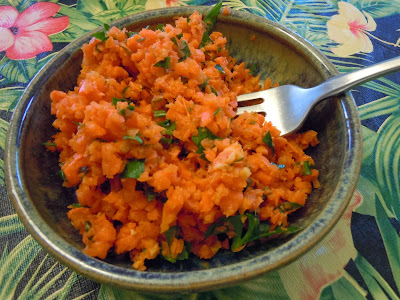 If my parsley garden is yielding, I'll add some parsley to the salad just for color.  If I'm feeling ambitious I might add some thinly sliced cucumbers, celery or cabbage.  I've even been known to use the carrots as a base for other exotic ingredients, such as this successful experiment, but that's only to use up stuff that's lying around in the fridge, not to improve upon the basic recipe, which is pretty good just by itself.

Posted by Kathleen Loomis at 8:44 PM

Email ThisBlogThis!Share to TwitterShare to FacebookShare to Pinterest
Labels: carrots