At Thanksgiving I wrote about augmenting my mincemeat pie with some apples, both to make the jar of mincemeat go farther and to cut its rich sweetness a bit.  One of my faithful readers, Sandy Ciolino, suggested that cranberries might serve the same purpose.

That sounded good to me, since I love tart foods and also since I had bought some cranberries that had never been used at Thanksgiving.  So the Christmas mincemeat pie had a layer of cranberries on the bottom.

The experiment was not an unqualified success.  A few people (but not my husband) thought too tart.  I used about two-thirds of a bag of cranberries (that would be about eight ounces, now that they have shrunk the package) and I think in the future I'd cut that to five or six ounces. 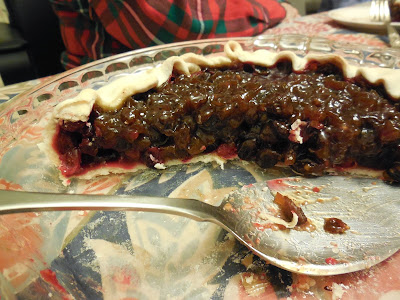 But the pie had a beautiful hint of red at the bottom and we're eating it with great relish, even through slightly puckered lips.

The pumpkin pie, on the other hand, was an unqualified success and disappeared very shortly afterwards. 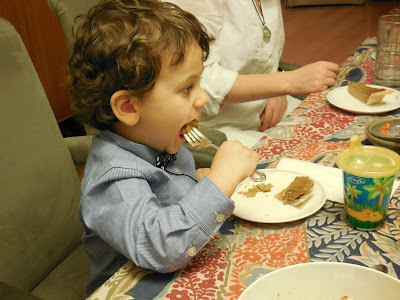 Posted by Kathleen Loomis at 10:14 AM