Thinking out of the box

When I was a kid, making things out of boxes was a mainstay of our household cooking repertoire.  Don't think I ever baked a cake that didn't start in a box (I'd say that continues to this very day, except that I've given up either eating or baking cake).  Bisquick, of course.  Rice-A-Roni (I still cook that, or its virtual equivalent, except that I learned long ago to do it from scratch).

As I became a more sophisticated cook and a more suspicious and demanding consumer, I gave up practically everything in boxes.  Except for one, which I couldn't live without -- Jiffy Corn Muffin Mix. It's a small box; two of us usually eat a little more than half a batch, leaving just enough for somebody's breakfast.  It cooks up quickly, 20 minutes in the oven. 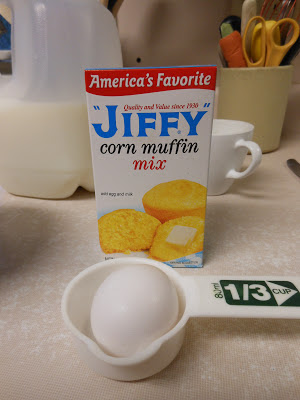 It is the perfect complement to chili or bean soup, which appear frequently on our menus.  And did I mention that it's delicious?

In the early postwar days, when cake mixes and similar "labor-saving" products first appeared, they were formulated so you just added water.  But then some marketing genius determined that women didn't want to just add water -- that made them feel useless and uncreative.  But if they had to add milk and an egg, they retained their feminine mystique of being good cooks.  (The next thing you knew, we had pudding cake!)

And so Jiffy still requires milk and an egg.  Which I am happy to supply.  I make it as corn bread rather than muffins -- easier to fix, easier to clean up.  In my nine-inch square pyrex pan, the bread is about five-eighths of an inch tall, just like a garment seam allowance. 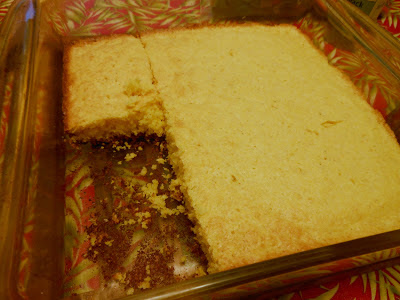 I know I could make cornbread from scratch, and perhaps it would be one percent better than Jiffy.  But it would take five minutes longer.  So I continue with my obeisance to the 1950s.

Posted by Kathleen Loomis at 12:00 PM