Say no to Papa

There's a Papa John's pizza store at the end of our street, and we've been patronizing it for years.  The last time was about three weeks ago -- and when I say the last time, I mean it. 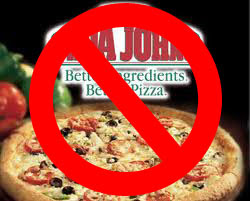 Papa John himself, John Schnatter, hates the Affordable Care Act.  He said earlier this year that providing healthcare for workers would add as much as 14 cents to the cost of a pizza.  Many customers opined that they'd be happy to pay it.  This week, now that the election makes implemention of the law a certainty, Papa came back with a new argument: it's likely that fulltime employees will have their hours cut below 30 so they won't have to be covered.

Papa says it will cost as much as $8 million a year to comply with the new law.  To put that in context, the company had revenue of $1.2 billion last year, and net income of $55 million.  John Schnatter's total compensation last year was $2.7 million and his net worth is estimated at slightly under $300 million.  The company is giving away 2 million free pizzas this fall as part of a football promotion.

There's not much I can do to persuade a captain of industry to behave more like a mensch.  I could point out that healthy employees are an asset to a company, particularly one in the food service business (who wants sputum with their pepperoni?).  I could point out that the US has been the only major nation in the world without some kind of universal health care system.  But those arguments probably aren't going to make much of a dent in Papa John's cranium.

What I can do is buy pizza from somebody else.  Which I, and many of my friends, have resolved to do.

Posted by Kathleen Loomis at 12:40 PM