High on my list of comfort foods is bread and gravy.  When we had it as a kid there was probably Wonder Bread underneath, but now that I am a grownup food sophisticate I have upgraded to Wonder-Bread-or-anything-else-on-hand. 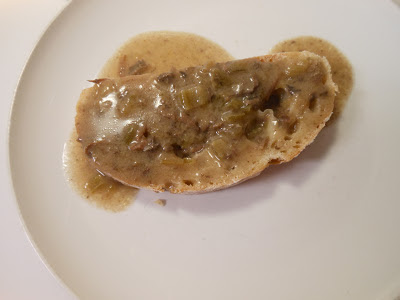 My mother used to serve my sister and me plates of bread and gravy with the huge enthusiasm of Tom Sawyer inducing suckers to paint the fence.  "We're having such a treat tonight!" she would gush, and we believed it.

In truth, this was probably the cheapest meal she could think of to put on the table during some dark days when my dad was out of work.  I suppose there had to have been a little meat in the house at a previous point, else where would the gravy have come from, but it didn't appear on our plates, nor did we care.

Many decades after I figured it out, I still love bread and gravy.  Stuff from the bottom of the pot roast pan, like today, is great.  Leftover gravy from Thanksgiving dinner is even better.  If there's some meat on the plate too that's fine, but hardly necessary for me to feel comforted.
Posted by Kathleen Loomis at 4:47 PM