I wrote several days ago about finding a new product at the ethnic grocery -- split garbanzo beans -- for which I had high hopes.  I'm back to report that I'm in love!

I used to think of garbanzos, aka chickpeas, aka ceci, as little beige spheres of blandness.  I use them in a wonderful soup which I will tell you about sometime, and I know that they can become hummus, but otherwise they are not on my culinary radar screen.  But a few years ago I became acquainted with a mixed grain product that has become a favorite in our kitchen.  It cooks up in a saucepan on the stove or in the rice cooker, in 20 minutes or so, and it makes an excellent side dish for dinner, with the leftovers perfect for a hearty warm breakfast porridge. 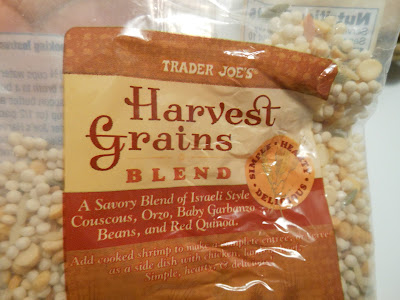 My favorite ingredient in the blend is the baby garbanzo beans, but sad to say, not as many of them as I might like.  At the grocery I could find dried garbanzos but they bore no resemblance to the delicate yellow hemispheres in my Trader Joe's mix. But at the ethnic grocery I found this bag of split garbanzos among the Indian foods. 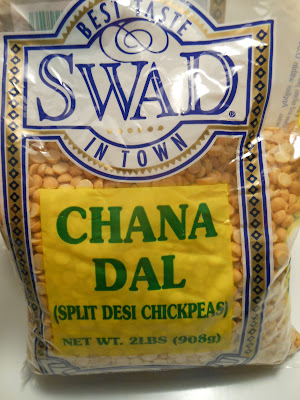 At the store I thought the Indian peas were larger than those in the Trader Joe's mix, but a side-by-side comparison found them identical.  Perhaps seeing a whole bag of them made them expand in my mind. 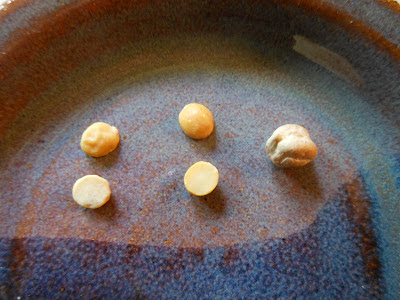 I've tried my new toys twice: once to augment a batch of Trader Joe's mix and once added to brown rice. Both incarnations were excellent. 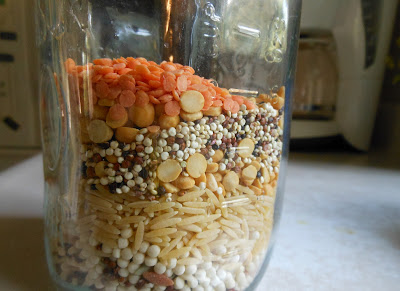 So after I brought out all these packages for a photo shoot, I decided to make my own grain mix, altering the proportions to have more of the ingredients I like.  In the bottom of the jar, what was left in the Trader Joe's bag.  On top, more orzo, some Indian garbanzos, more quinoa and for good measure, some red lentils, which also cook quickly.  I think it will taste just as good as Trader Joe's original recipe, but should be healthier and prettier, not to mention cheaper.

Posted by Kathleen Loomis at 4:47 PM