When my kids were still at home, sharing a big breakfast was a common activity on the weekends.  Sometimes we just had eggs with sausage or bacon, other times we'd fix pancakes, waffles or french toast.  Of course I was the cook, while the guys sat at the table salivating for their grub.

With this setup, naturally I was the last to eat.  By the time I fed everybody, then fixed my own food and came to the table, the thrill was gone.  At least one guy was probably done and clamoring to be excused.  I got the pleasure of a nice plate of food, but the companionship of a shared meal was mostly gone.

Well, so much for companionship.  Let's focus in on the food.  The last egg out of the pan isn't qualitatively different from the first, and if you're vigilant in saving enough bacon for yourself, who cares if you're the last to eat?  Pancakes were problematical because you might run out of batter before you fed yourself, but over time you figured out how much to make.

With french toast, though, the first piece is different from the last. 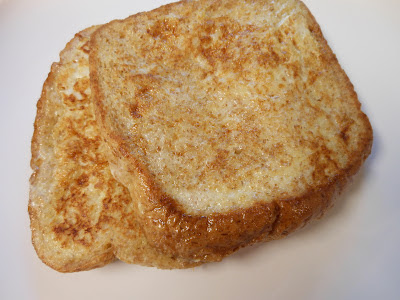 There are two styles of french toast: puffy and crispy.  Puffy comes early in the day, from bread that has soaked up plenty of eggy milk and becomes airy and light in the frying pan.  Crispy comes at the end of the road, when there isn't much eggy milk left and thus the leavening effect of the eggs is weaker.  You get nice fried bread, but it's not exactly french toast.

The cook gets crispy, even when the cook might prefer puffy.

When it's just me, I use one egg and some milk.  That's good for two or three slices of bread, depending on the size and thickness of the bread.  I usually add a schluck of vanilla to the eggy milk, which gives a nice flavor boost.  I never use syrup, just a bit of salt at the table.  It's delicious, and good enough for dinner if I'm all by myself.


Posted by Kathleen Loomis at 6:38 AM

Email ThisBlogThis!Share to TwitterShare to FacebookShare to Pinterest
Labels: breakfast