Today we have a tomato bonanza.  Not because of our garden -- I'll give you an update on that sorry situation in a later post.  Instead we went to the farmer's market.

Our favorite farmer always has two tables of tomatoes.  On the big front table are perfect tomatoes of several different varieties, at $2.50 a pound.  On the back table are seconds, at $1.20.  I always like to buy the cheap seconds, figuring we'll eat them quickly and what's the difference.  My husband always likes to buy at full price, since he has noted how we often have to cut out a bad spot from the seconds.

I note that we never lose half of the tomato, so we're ahead on price even if some spots go bad.  He notes that it won't kill us to spend another dollar or two.  We have not resolved this issue and I don't suppose we ever will.

Today he announced that he was going to buy full price.  I announced that I was going to buy seconds and roast them in the oven the minute we got home.  So we each did.  Then on the way back to the car we saw two huge heirloom tomatoes on the sidewalk, apparently escaped from some other shopper's bag.  I picked them up, inspected them and found only the damage you would expect when a perfect tomato hits the ground.

So we found ourselves with this haul -- full price on the left, seconds in the middle, and sidewalk finds at the right. 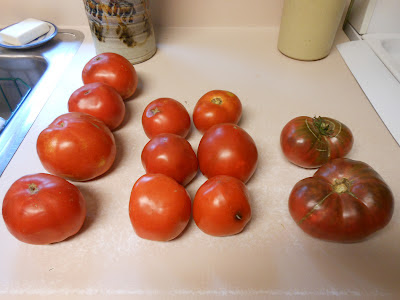 Plus another find: when I was taking some stuff out of the back of my car I found a tomato on the floor, under the front seat.  Can't remember when it got there.  It had started to go bad on one side, but not to the point of ruining my carpet, so I cut out the bad part and put the good half into my roasting pan.

The rosemary is about our only successful crop this year, and I put some big sprigs into the bottom of the pan.  Poured olive oil generously over the cut-up seconds, and roasted them at about 300 degrees for a couple of hours.  There was room in the pan so I threw in an eggplant too. 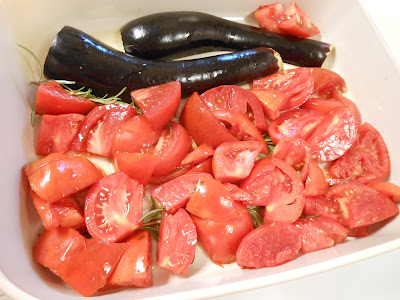 I love the way tomatoes roast down and caramelize in a slow oven.  You do want to take out the juice every now and then, so they can roast rather than stew, but save it, because it has reduced and sweetened as well.  Finally I deglazed the pan with a bit of marsala wine and added that to the juice. 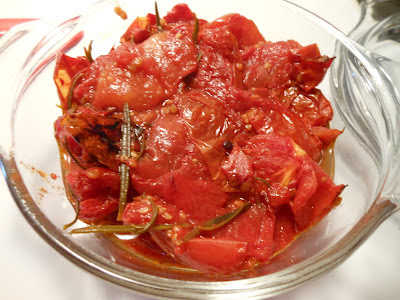 Here's my bounty: the tomatoes cooked down dramatically, but are enough for a magnificent pasta meal sometime next week.  And plenty of perfect tomatoes to eat raw in the meantime.

Posted by Kathleen Loomis at 2:55 PM