The lettuce family has many members, and not all of them are suited for salads.  One of my favorites is escarole, a coarse, slightly bitter green that really needs to be cooked to bring out its best. 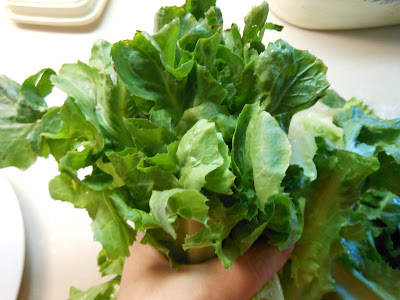 We were introduced to escarole at a fancy Italian restaurant in New York in 2000 when it came unbidden, the vegetable du jour alongside our entrees.  It was sauteed and dressed with something acidic, and we had to ask the waiter what it was.  We came home and started fixing it as a cooked vegetable, sauteed in olive oil in a frying pan and finished with a squeeze of lemon, a bit of white wine in the pan or a little vinegar sprinkled over the plates.

But a few years later I saw a recipe in the New York Times for escarole and beans, and it was one of those  moments that changed my cooking and eating repertoire forever.  I've made it so many times that it's been internalized; I don't need the recipe any more, and in fact it has graduated from a recipe to a concept.

That's an important step for people who cook like I do; I don't like recipes because (a) you might not have the right stuff on hand to follow them exactly and (b) you might not have your cookbook available.  It's better to have a concept, a general idea of what to do, but open to lots of flexibility as to specifics.

So here's the concept of escarole and beans.  I use it once or twice a month, pretty much whenever we can find a nice head of escarole at the store (not always).

Put some beans in a really big pot.  Canellini are best, and failing that, another white bean such as great northern or navy is next best.  Or heck, something red or yellow or black would probably work just fine too.  Canned beans are fine (Progresso and Bush both make excellent canned canellini) but if I have time I'd just as soon cook up a pot of dried beans from scratch.  Two cans of beans will generously feed two for dinner, but a pound of dried beans will feed two for several meals.

Season the beans with some mojo -- garlic, onions, anchovies, hot peppers, country ham, whatever you like.  If you're starting from dried beans, make sure to add enough salt.

If you want, put some other vegetables in the pot.  Carrots and celery seem obvious, but see what else you have in the fridge.  Add liquid to make a soupy consistency.  If I start with canned beans, I add a can or two of chicken broth.

To this point, basically you have made bean soup.  If you have a favorite way to make bean soup, by all means use it.

Now get your escarole.  Wash it, chop it into bite-size pieces, remembering that it will wilt and shrivel once it hits the hot soup, so the pieces can be on the large size.  You will think that you have enough of this stuff to feed an army, but not really.  I find that a big head of escarole will feed two of us for dinner, with enough green stuff left in the soup pot for another meal.

Dump the cut-up escarole into the pot, stir so the greens go underwater, and simmer for 10 or 15 minutes until the thickest pieces of escarole -- the white stems -- are not crunchy any more. 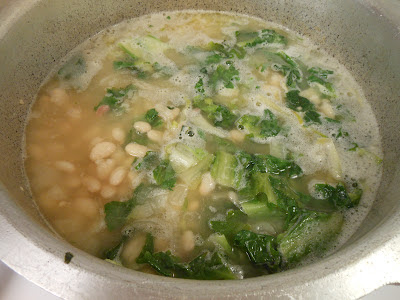 Serve as soup, or if you like, use a slotted spoon to fish out the beans and greens, leaving much of the liquid behind.  You'll probably still want to eat it with a spoon rather than a fork, but who knows.  I like to add grated parmesan cheese at the table, or stir in some pesto.

The leftovers are just as good tomorrow.

Posted by Kathleen Loomis at 3:18 PM