Best service of the month

The other night we ate out and had an experience that I've never had before.  I ordered an antipasto that was supposed to contain Tuscan beans, spinach, tomatoes, pancetta and shrimp.  In fact, shrimp was in the title of the dish -- fagioli e gamberi.

The dish came and after I squeezed some lemon over the top of it, I took up my fork -- and realized there were no visible shrimp.  I poked around in the beans a bit and still no shrimp.  I mentioned this to the others at the table, and tilted the dish just a bit to show the person sitting next to me.  Hadn't even reached the point of looking for our waiter.

And at my elbow a guy appeared to say, "is everything all right?"

It was the owner of the restaurant.  He looked at my dish, said, "oh my, there certainly aren't any shrimp there, let me fix it" and whisked it away. 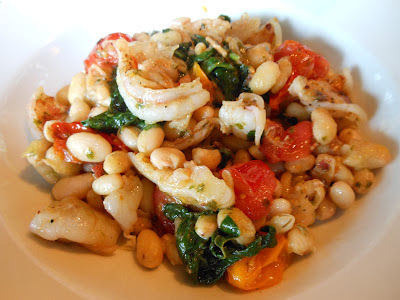 When it came back there certainly were shrimp there, probably more than there would have been under normal circumstances.  It was a fine dish and I'll order it again, or better yet, try to make it at home.

After dinner the owner showed up at our table again to inquire how we had liked everything.  We told him we all were delighted, and I asked him, "how did you know I was upset?"  He said he didn't really know, he was standing there surveying the scene, happened to look our way and picked up some vibe. I guess that's what makes a great restaurant -- people in charge who stand there keeping watch, and who are attuned to the mysterious vibes coming from their customers.

So my hat is off to Tim Coury, owner of Porcini's in Louisville, where we've never had a bad meal.
Posted by Kathleen Loomis at 6:38 AM