It's getting hot, and I'm trying to get into my summer eating habits, so I got a big bunch of parsley at the grocery (ours is growing nicely but not big enough for a harvest the size I had in mind) and picked a bunch of mint and chives from the garden and set out to make tabouli.

I washed and de-stemmed the herbs and whizzed them up in the Cuisinart, then put bulgur to soak in warm water.  Oops, not as much bulgur as I wanted -- and after a huge search of the pantry we realized there was no backup package.

I fretted while the bulgur reconstituted itself, realizing that I had way too much green stuff as a proportion of brown stuff.  Parsley and mint are wonderful, but they need a fair amount of some relatively neutral base to play against.

And then inspiration struck.  I got some red lentils and cooked them, which takes less than a half hour.  Perhaps I was distracted, because I got the cooking wrong.  When I returned to the stove, there wasn't enough liquid in the pan to make soup, and the lentils were too far toward the mush end of the spectrum to turn them into a salad, so I poured a can of chicken broth over the top.  Then half of my chopped green herbs went into the pot.

The next day I heated it up and added some spinach from the salad towel in the fridge. 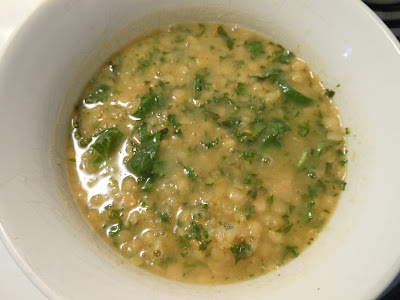 Halfway between soup and porridge, it was a wonderful bowl of springtime.  The big handful of herbs, plus the chicken broth, were all the seasoning it needed.  And the tabouli came out perfect with the rest of the herbs, in just the right balance of green and brown.

Posted by Kathleen Loomis at 8:21 AM