Today is Kentucky Derby Day, and perhaps you're thinking that it might be just the time for a decadent mint julep.  Even though it's early in the afternoon, thousands of folks out at the track are already indulging, some of them continuously since last night, so why not you?

Indeed, the mint julep is a beloved tradition in Kentucky horse country.  You need to have a real silver julep cup, and some mint, and some Kentucky bourbon.  And ice and sugar.

Traditionally you start with crushed ice in the julep cup, so it will get cold and frosty.  You cook up some simple syrup with the sugar, cool it down, then put mint in with the syrup, crushing the leaves with a spoon or pestle or smooth rock till the syrup gets all green and herbal.  Mix with bourbon and a bit of water.  Pour over the crushed ice in the julep cup, and stick a fresh sprig of mint jauntily on top.

One of the famous Kentucky curmudgeons had his own version of the recipe.  He diligently recited all the stuff about the mint and the sugar and the smooth rocks, and then he concluded, "throw all that stuff away and drink the bourbon."

Although I own several official mint julep cups (they used to be popular wedding presents in Kentucky) they're all tarnished and they live at the storage locker.  But I do have lots of mint.  In fact, my mint is a family heirloom. 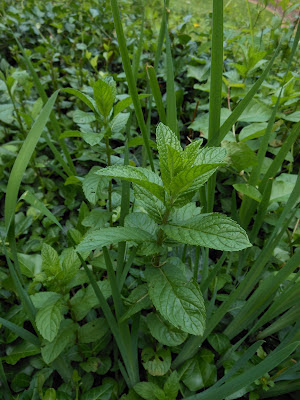 My mother acquired the mint in the late 1950s from a neighbor and it grew just outside our front porch. When we moved from New York City to Syracuse in 1960 she dug it up and put it in our "garden" at the new house.  It was newly built, and the "soil" had a high concrete and construction waste content, so getting things to grow was not easy. But the mint survived.

In fact, mint, like cockroaches, is one of the great survivors of all time.  If it weren't so perky and delicious you might be tempted to call it an invasive species, because it not only sends its roots down, it creeps horizontally with great vigor.

When my husband and I got our own garden Mom brought us some mint, which made itself at home and became the mother plant for future generations.  We sent cuttings to other family members as they got their own gardens.  And if you need some I could probably send some to you.

In an attempt to constrain the mint to its own place, my husband put it into a barrel at the end of the driveway, but it escaped and started colonizing the garden.  So last year he exiled it to a spot amongst the ground cover at the far end of our lot, where it's holding its own and by the end of summer may well have taken over.  I have to take a walk to harvest it, but it's a sacrifice I'm willing to make for my juleps or tabouli or ice cream parfaits.

Posted by Kathleen Loomis at 1:43 PM