A houseful of people came over for dinner the other night and I didn't want to do any serious cooking.  So I decided to make my one-dish no-work chicken -- nice enough for company and fairly easy to make.  I always like dinner menus where you can get your preparation done early in the afternoon, then retreat to sew, play Killer Sudoku or read a book while the food cooks itself.  And occasionally I like recipes where you can open some cans instead of making everything from scratch, thus getting me out of the kitchen faster.

This dish can be done on the top of the stove in a dutch oven or in a crockpot (that way takes a bit longer and probably isn't quite as delicious, but it's pretty darn good). 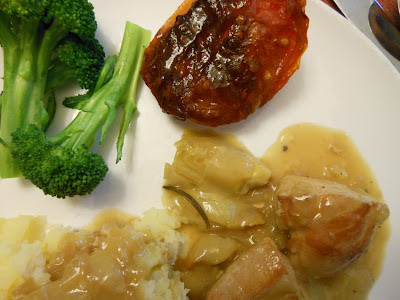 I had seven people for dinner, three of whom are BIG MEN, and I started with just over two pounds of skinless, boneless chicken breasts.  I cut each one into three chunks so those of us who are not BIG MEN could take smaller servings.  I browned them in a bit of olive oil over high heat and removed them to a plate.

I cut four onions in half and then sliced them into long skinny threads, put them into the pot that the chicken had been in, and cooked them for a while on medium heat till the onions got translucent.  Had I felt ambitious I might have kept on till they started to caramelize and turn brown, but I didn't want to spend the whole day in the kitchen.

While the onions cooked I chopped up some garlic and threw it in with the onions.  How much garlic to use in any dish is always a very personal decision -- use as much as you and your guests can tolerate.  But remember that cooked garlic isn't anywhere near as strong as raw, so be brave.

Our rosemary plant has been looking healthy and starting its spring growth spurt, so I cut a foot-long sprig and buried it underneath the onions.  Dumped the chicken back into the pot and added a can of cream of chicken soup, about a half can of white wine, and a can of artichoke hearts, cut into quarters.  Ground some black pepper over the top.   After everything had warmed up and started to cook enthusiastically I turned the heat down so the liquid was barely moving, with languid bubbles every now and then.  And went away for three hours.

While I did other things the ingredients cooked together and made their own gravy, which we ate over mashed potatoes.  If you didn't want to do potatoes, you could serve a sturdy bread to sop up the gravy.

If you use a crockpot, you wouldn't bother with browning the chicken or the onions -- just dump everything into the pot and go off to work.  The dish might be a bit paler but it will taste just fine.  You might even put some quartered potatoes into the pot and let them cook with the chicken.  (I guess you could do that in the dutch oven, too, and save yourself the trouble of making mashed potatoes.)

If you aren't having lots of BIG MEN over for dinner, use just one package of chicken breasts, about one pound.  But still use one can each of soup and artichokes.  You'll end up with proportionally more vegetables and gravy but it won't change the taste, consistency or effect.
Posted by Kathleen Loomis at 10:55 PM