I once complimented my boss's wife at a dinner party on her delicious green salad.  "It's so simple," she confided, "just put a teaspoon of sugar in the dressing."

I don't know about other nations, but the U.S. is addicted to sugar, and you can tell by observing the overweight people all around us -- and maybe even those who are us.  And I don't use the term addiction in its purely metaphorical sense.  According to a recent story in the New York Times, "Researchers using brain imagining technology have ... found that foods high in sugar or fat activate the same reward system as cocaine and other drugs."

In addition to Alice's salad dressing, other recipes from my past include gratuitous sugar.  My mom used to put sugar in the spaghetti sauce; my mother-in-law used to put it in the chili.  I'm not counting the various baked goods that don't appear to be sweet -- bread? -- but still call for sugar.  And that's just the deliberate sugar added in the kitchen; how about all the sugar in processed foods that don't seem to need it?

Here are some surprise sweeties from my cupboard, with details from the small print. 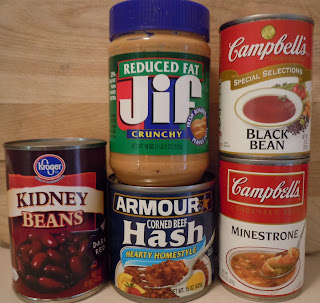 Peanut butter: 4 grams of sugar in 2 tablespoons; corn syrup solids are the second ingredient, after peanuts.

Beans:  3 grams of sugar in a half-cup; cane syrup is the third ingredient, after beans and water.

Hash:  1 gram of sugar in a cup ; the fourth ingredient, after beef, potatoes and water.

Black bean soup:  5 grams of sugar in a half-cup serving; the fourth ingredient, after water, beans and salt.

Minestrone:  3 grams of sugar in a half-cup serving; way at the bottom of the ingredient list as glucose syrup.

The presence of sugar in processed foods is one reason why U.S. sugar consumption has skyrocketed in recent decades.  As a lover of spreadsheets, I was fascinated at the information provided by the U.S. Department of Agriculture on sugar production and consumption.

More striking is the dramatic rise of corn sugars as a player in this drama.  In 1966 only 14 pounds of the per capita sugar load came from corn -- just over 10 percent of the total.  By the mid-80s corn was providing more than half our total sugar, peaking in 1999 at 83 pounds, 55 percent of the total.  In 2009, the last year for which data is available, corn's share slipped a hairline below half.  Clearly the unfavorable publicity given to high-fructose corn syrup in the last decade is having an effect.

I find these figures alarming, and not just because they herald our growing obesity.  I'm also unhappy that my tax dollars are supporting this trend, because agricultural subsidies are integral to the corn industry.  Big Corn has been fighting back against the anti-corn-syrup movement with commercials in which they correctly point out that sugar is sugar no matter what form it comes in.  That's true nutritionally, but not economically; corn sugar is less expensive than beet and cane sugar.  And HFCS isn't the kind of stuff you buy on a supermarket shelf and use for grandma's cookie recipe; it's an industrial product used in highly processed foods.

So my inner paranoid shopper doesn't have to work too hard to infer that the presence of corn sweeteners on a label indicates a cheap (subsidized) thrill that's good for Big Food but bad for you and me.

As I've become more health-conscious I've stopped putting the sugar in my chili and spaghetti sauce, and can't say that we even notice the difference.  But I'm kind of annoyed that food processors are still doing it, and that I don't have an alternative except to make my own soup and hash and beans.  I'm not such a health nut that I'm willing to give up the convenience of canned and packaged goods entirely.  But I wish Big Food would reconsider that knee-jerk teaspoon of sugar.  I bet the hash would taste just as good without it.
Posted by Kathleen Loomis at 12:35 PM