When I was looking for carrot pictures to illustrate my last blog post, I came upon a photo of my carrot salad in process and realized that it featured one of my favorite kitchen tools, the microplane grater.  Can't remember how long I've owned this tool, but despite its age it's still as sharp as ever (just like me!!). 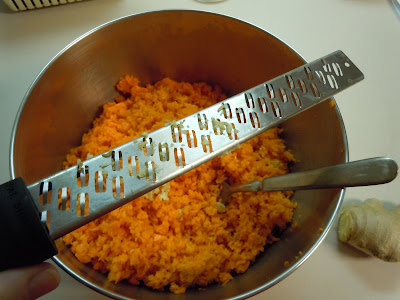 Supposedly the story behind the tool is that a woman needed to grate something and couldn't find her big old box grater, or maybe it was dirty.  So she frantically looked around the kitchen and saw ... a woodworking tool that her husband had just bought but hadn't put away yet.  It was clean, it was sharp ... and did a better job of grating than the old grater.  And a business was born.

I use the grater for ginger, as in the carrot salad, but mostly for parmesan cheese.  Which is the essential finishing touch for pasta, risotto, salad and many kinds of soup. 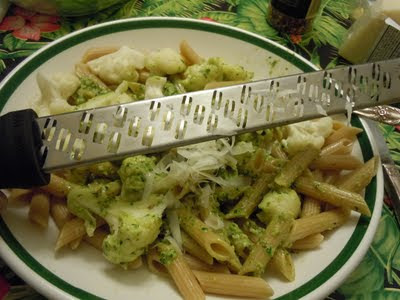 I first learned about parmesan cheese when we moved to Syracuse NY, aka Sicily West, in the 1960s, and discovered real Italian food.  My friend Maria's mom first introduced me to grated cheese in the minestrone (Germans didn't do things like that, partly I guess because Germans didn't have nice hard cheese).  She also taught me the Italian mom's mantra that there is no food on earth, except maybe ice cream, that wouldn't benefit from a little cheese grated over the top.

I'm embarrassed to remember that when I first set up my own kitchen, I bought Kraft grated parmesan in the big round green cardboard box.  But I don't think there was an alternative -- I don't remember actual fresh parmesan cheese in stores until the 80s or 90s. (Should never have moved away from Sicily West -- plenty of the real stuff at Wegman's even in the olden days.)

When I graduated to chunks of cheese, I would grate them in the Cuisinart.  But when I bought my microplane grater I thought I had died and gone to heaven.  You can grate only as much as you want!  You can take it to the table and everybody can do their own!  If at the end of the meal there's more food than cheese, you can just grate some more onto your plate!

I looked on the internet and realize to my dismay that the microplane I love has apparently been phased out.  Other models are similar, but not identical.  I'll have to take special care of mine so it lasts the rest of my life.
Posted by Kathleen Loomis at 2:55 PM