So about a week ago we bought an big acorn squash.  Its first appearance was the no-brainer, where you cut the squash in two, scrape out the seeds and bake it in a 400-425 degree oven for an hour.  What could be simpler?

But we only ate half of it.

A couple of days passed, and we had some leftover mashed potatoes in the fridge, plus that half squash, so I decided to kill two birds with one menu.  I added the squash to the spuds, mixed them together with a little milk, and came up with a pale yellowish mashed substance that tasted subtly of both its parents and nicely complemented the pork chops and brussels sprouts. 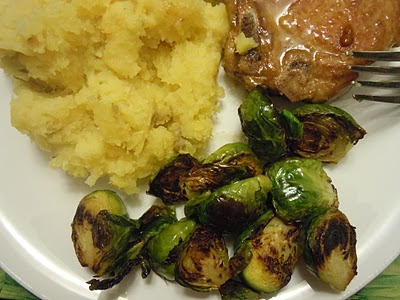 But this was like the eternal pot of soup -- after I combined the two leftover portions, we ended up with too much food for one meal.  Now I had a dish of yellowish stuff in the fridge.

The third reincarnation of the squash was to make it into a pancake, augmented by a sauteed onion and two eggs, fried up and topped with mozzarella cheese.  Arguably the best version of the squash -- but that just goes to prove that you can make anything more wonderful by melting cheese on top of it.
Posted by Kathleen Loomis at 11:44 AM