I wrote the other day about my frustration with nutrition labels -- or more accurately, one of my frustrations -- because they don't use a uniform serving size.  In response to a comment, I said that the more I read nutrition labels, the less I want to buy what's inside the package, and that the healthiest and best food is that you make yourself. 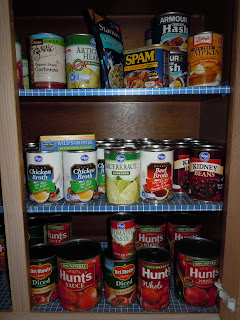 
Food processing is a wonderful thing, and people have been taking advantage of it for thousands of years.  In a nutshell, it allows you to transcend the inherently short shelf life of food -- to keep your food past its natural spoil date.  Early food processing techniques included drying meat and fruits, turning milk into cheese and yogurt, fermenting vegetables into pickles and sauerkraut, preserving foods with spices and salt, transforming grains and grapes into beer and wine.

In the olden days most food processing occurred at home.  Prehistoric peoples gorged on a killed animal, then dried the rest of the meat for future use.  After agriculture developed, people ground their grains into flour and made their own sausage and kraut.  After canning was invented (at the orders of Napoleon, who needed better sustenance to take his armies on longer and longer expeditions of attempted world conquest) people put up the fruits and vegetables from their summer gardens to eat in the winter.

Food processing was time-consuming, but without it you didn't make it through till next year.

Many a housewife must have thought she died and went to heaven when commercially canned foods appeared.  Peas and corn and green beans at your fingertips, even if you didn't grow and can them yourself!  I remember canned vegetables as a mealtime staple (most of them weren't very good) and I clearly remember the excitement and wonder with which we embraced frozen foods after WW2.  Frozen corn and green beans still aren't half bad, even to palates jaded by year-round fresh vegetables from California, Mexico and Chile.

On the whole, American nutrition improved vastly because of the wide variety of fruits and vegetables made available through commercial canning and freezing.  Yes, some people had gardens and ate well-balanced meals without benefit of processed food, but most people didn't.  How did you grow vegetables if you lived in an apartment, or if you were too feeble to dig in the garden?  Even if you had a house with a yard, vegetable gardening was an old-fashioned hobby not practiced by everybody.  Remember, they had to have a PR campaign to get people to plant Victory Gardens during the war because the practice had fallen out of favor.

In those post-war wonder years, however, food processing took a turn toward the dark side.  Not content with rescuing the American public from malnutrition, the food corporations looked for more and more products, more and more NEW, IMPROVED things to sell us.

Like TV dinners.  And you had to buy TV trays on which to eat your TV dinner in front of your TV.  My father did not consider TV dinners to be food, so they were served only to the kids on nights when he was out of town (that was a lot, so we ate a fair number of them).  (The best part was the compartmented aluminum tray, which prevented the juice from the corn from getting the fried chicken soggy.)  The food wasn't awful, but it was sure a step down from the chicken dinner that Mom made, even if Mom used canned corn.

In the fullness of time TV dinners begat frozen pizza and frozen tuna melt sandwiches and frozen sausage-and-egg muffins and a whole raft of combinations that surely do not deserve freezer space in the great supermarket of life.  Move out of the frozen food aisle, and you find products where you may not even understand the basic concept -- like Splenda with fiber.  Michael Pollan, the guru of sustainable food, calls them "edible foodlike substances."   Whatever they are, you know they're overprocessed, unhealthy, and really expensive.

That's one dark side of food processing -- the infinite imagination of Big Food, supported by infinite advertising dollars to make you want to buy the strange things they produce.  The other dark side is the inherent chemical requirements of food preservation.  You need to add salt and BHT and sodium alginate and a lot of other things not found in your spice cabinet, lest the food get mushy and gray in its can or package.  That's not to say that Big Food doesn't add too much of this stuff, particularly salt, but even if you get your groceries from Little Nice Warm And Fuzzy Healthy Food, there have to be some additives.

I've been thinking more and more in recent years about the food I eat and serve, and have concluded that whenever possible, it's desirable to keep my food processing in my own kitchen.  Fortunately I have the time to cook from scratch, I enjoy doing it, and I enjoy the rewards of serving food to a hungry, unpicky and appreciative family.

I also know that a lot of people are in different situations, and it's very difficult for them to approach food the way I do.  Cutting yourself loose from the sticky tendrils of Big Food is not an easy task.
Posted by Kathleen Loomis at 12:05 PM