In the midst of assembling grilled cheese sandwiches I finished up one package of sliced Swiss and had to open another.  I first noticed that the cheeses were different because the old one was packaged in a zip lock bag while the new one had to be cut open with a scissors.  In the course of decanting the new cheese into the perfectly usable old zip lock bag, I inspected the packages a bit more carefully. 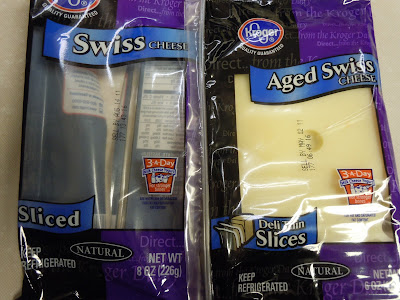 So I wondered if there was really any difference between the two besides cosmetic.  While I was waiting for the sandwiches to turn brown, I happened to look at the side-by-side nutrition labels -- and had to postpone my consideration until I used my calculator.

The "aged Swiss" was also denominated in a serving size of one slice, but since the slice was thinner and smaller, it was only 21 grams.  It contained 80 calories, 50 calories from fat, 3.5 grams of saturated fat, 20 mg of cholesterol, 6 grams of protein and 45 mg of sodium.

Now suppose you were reading these labels in the grocery store instead of at home with your calculator.  Are they the same, except for the aging?  (Which can't be too substantial a difference -- one was aged "more than 60 days" and the other "more than 90.")  Which one should you buy?

Probably you can't tell the difference unless you're a savant who can do serious multiplication and division in your head.  My calculator informed me that the two varieties are virtually identical, nutritionally, and the tiny differences looked to me like rounding error because nutritional info is generally listed in whole numbers.

My inner paranoid shopper thinks that food processors may not deliberately determine package sizes to make the nutritional labels harder to compare, but they sure aren't going to be unhappy if that occurs.   My i.p.s. reminds me how somebody has often gone to great lengths to subvert the intent of unit pricing labels, which were supposed to eliminate the kind of arithmetical fog I just described.  How many times have you tried to compare product prices only to find one at 4.3 cents per ounce, one at 73 cents per pound, and another at 12.1 cents per teabag or whatever?

My i.p.s. wonders why food processors shouldn't be required to give us info not just per some arbitrary serving size but also per 100 grams?  That way no matter how thin you slice the cheese, it would be easy to compare different products.
Posted by Kathleen Loomis at 7:33 PM