My father was in the Army in WW2 and like so many other soldiers, found some things to love about the service even though war was hell.  One of the things Dad loved was fresh salad, available every day in US mess halls and even served now and then in the war zone.  Best of all, most of his fellow soldiers didn’t like it, so he could have seconds and thirds.  As he was a picky eater who hated much of the stuff doled out as institutional food, the salad often constituted his entire meal.
So Dad came home from the war with an enduring passion for salad.  Every night we had one – iceberg lettuce with orange Kraft French dressing, sometimes with sliced green olives.  Sometimes we would fix leaf lettuce wilted under a dressing of hot bacon grease, but that’s as exotic as it got.
In the 1940s and 50s salad was not an everyday item on American menus, especially in the northern Midwest.  There was lettuce in the summer if you had a garden, and cabbage year round to make coleslaw.  But the concept of different greens and raw vegetables, not to mention different dressings, was decades away from catching on.
It wasn’t until many years later that I broadened my definition of salad to include different kinds of lettuce, different kinds of dressing, and different vegetable matter and garnishes. 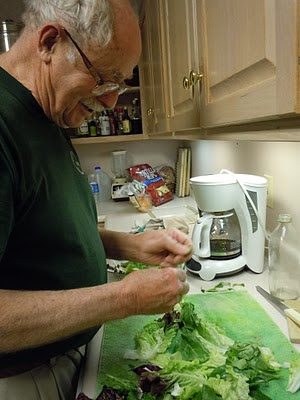 One of the nicest developments in my culinary life came when my husband became vice-president in charge of salad.  He likes to wash all greens as soon as they enter the house, spin them dry, wrap them in a towel, put the towel in a plastic bag and stash it in the fridge.  They will keep for a week or more at perfect crispness, and fixing a salad every night is much easier when you can start with the greens all ready.
We always make a vinaigrette dressing with olive oil, plus half vinegar and half lemon juice.  A different kind of vinegar every night gives a little change, even when the lettuce is pretty much the same, coming as it does out of the same towel. 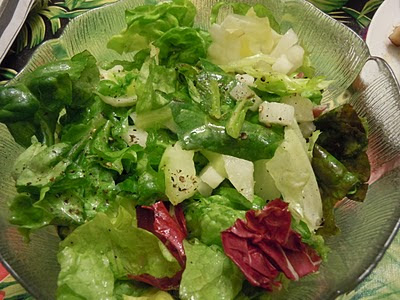 We try for variety in the greens as well.  Belgian endive and radicchio come from the grocery.  Ken plants spring and fall crops of spinach and arugula, and this month he's started seeds for mache, a variety we've not tried before.

We like the crunch of croutons, but find that the ones you buy in the salad aisle are too big and too aggressively seasoned, not to mention quite expensive.  Instead, we buy stuffing mix, which yields small bits of crunch with a more pleasant taste.  Additional ingredients that we like, but don’t use every night, include cucumbers, avocado, olives, artichoke hearts, jicama, cheese and pine nuts.

We fix large servings of salad for ourselves, served in our special big glass salad bowls, and must remember to fix less for company (unless the company is our sons, in which case we fix even more).  It’s the pole star in our dinner repertoire, always there, always good, always nutritious.
Posted by Kathleen Loomis at 9:24 PM

Email ThisBlogThis!Share to TwitterShare to FacebookShare to Pinterest
Labels: salad