Other than a visceral understanding that too much sodium is bad for you, until very recently I didn't know very much about the specifics, and I can't really say why I suddenly got hungry for a little more info.  Decided I needed a research project to learn more about the basics, and then to look a little more closely at how much sodium we eat and whether I should make some changes to my shopping and cooking habits.

The first thing I realized, after a while on Google, is that there's no simple rule for how much sodium is too much.  While the Food and Drug Administration has detailed guidelines on how much Vitamin C and many other nutrients you need, they are remarkably silent on the subject of sodium.  Being a political paranoid, I am willing to believe that the processed food industry has bought sufficient presence in the decision-making circles of the nutrition establishment that you are unlikely to see any rigorous guidance on this subject from the government any time soon.

You need to have 500 mg of sodium every day for your body to work properly, but not a whole lot more.  The Committee on Dietary Allowances of the National Academy of Sciences, which I believe to be a relatively trustworthy body, has set the "Estimated Safe and Adequate Daily Intake" as between 1100 and 3300 mg a day.  But the very fact that this "estimate" covers such a huge range makes you a little suspicious.

The American Heart Association promotes the "DASH diet" -- which stands for Dietary Approaches to Stop Hypertension -- with a much clearer recommendation: eat less than 1500 mg of sodium per day.  I feel a little more confident with this figure, simply because it's an actual figure rather than a wide range, and decided that this will be my general guideline/target as I assess my own sodium consumption.

Whatever target you set, it's clear that most Americans are way, way over the top -- on average, somewhere between 2300 and 6900 mg per day.  (Again, the wide range makes you suspicious that somebody doesn't really want to find out how bad the situation is.)

In general, 75% of that sodium comes from processed foods.  The major sources: soups, condiments, canned foods, prepared mixes, salty junk food and tomato sauce.  I was taken aback to see that last item -- can we possibly eat enough tomato sauce to rank up there with every other variety of canned food put together?  But then I realized that people eat lots of pizza, lots of pasta, lots of Manwich, and maybe that does really add up (or maybe there's just one helluva lot of sodium in the stuff).

I think that my household is probably on the low end of the sodium spectrum, at least when we eat at home.  We eat mostly fresh vegetables rather than canned, don't add salt to any food except for beans and bean soups, buy low sodium products when we have a choice, and generally make meals from scratch rather than buying commercially prepared food.

I don't want to become obsessive about sodium.  Both of us maintain our blood pressure in the acceptable range, and I enjoy the occasional bag of junk food as much as the next person.  But I can keep track of that and keep my potato chip intake to a reasonable level.  I'm also aware that when we eat out we may be getting more salt than I would ever cook with at home.  What annoys me is the stealth sodium -- the stuff that sneaks in when I think we're eating healthy food.

So I decided to pay attention to sodium in my own kitchen for a while and see what I find. 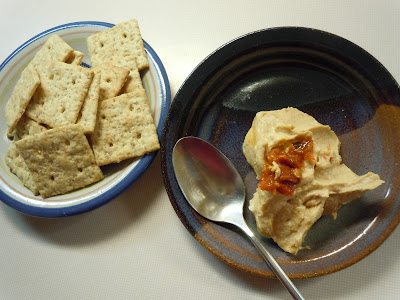 Just to start, here's my snack from yesterday, 2 TB of red pepper hummus (120 mg) and 17 wheat thin crackers (180 mg).  That doesn't sound too bad (although I didn't do the obvious exercise of adding up everything else I ate that day).  I'll continue to keep my eyes open and see what I discover.
Posted by Kathleen Loomis at 6:08 AM

Email ThisBlogThis!Share to TwitterShare to FacebookShare to Pinterest
Labels: sodium