My pasta plan -- so how about the pasta? 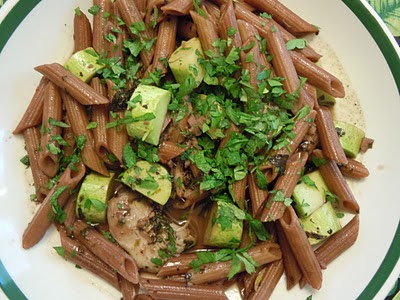 In writing about my pasta plan, I neglected to discuss one important element -- the pasta.  For many years I cooked pasta the way I suspect most other people do. Got a huge pot of water going, and when it was boiling, dumped in some dry pasta, stirred it frequently so the pasta wouldn't stick together, then drained it through a colander or sieve in the sink, hoping to avoid steam burns on my arms or inadvertently flipping the sieve and losing the pasta down the drain.
A few years ago I finally remedied the sink situation by buying one of those dedicated pasta pots with a perforated insert.  Just lift up the inner pot and the pasta comes out of the water to drain.  I can't figure out why the designers couldn't go the last mile, however, and build in a doodad to hold the inner pot in place.  Instead I have to perch it precariously on an angle atop the big pot, hoping the whole thing won't fall back and send a tsunami of hot water over my stove.
This method has the obvious advantages of being intuitive and effective, especially with the special pasta pot.

But a couple of years ago I read an article that changed my cooking life.  It suggested that you could cook the pasta right in the same pot as your sauce.  Well, duh. Works for rice, why not pasta?  Why didn't I think of that?  I tried it once and was hooked.

Let me count the reasons.  First, it takes less time -- no gallons of water to boil first.  Second, it doesn't heat up the kitchen as much as those boiling gallons.  Third, fewer pots to wash.  But best of all, the flavor of the sauce infuses the pasta, so every given mouthful tastes great; you don't have your nice sauce sitting on top of a pile of bland starch.

Here's how to do it.  Use a big Dutch oven pan so there's plenty of room for as many dishes of pasta as you need to make.  Start your sauce and put in all the flavor and liquid ingredients.  Now do some mental arithmetic, decide how long your solid ingredients need to cook and stage them up on order of cooking time.  The pasta will take ten to fifteen minutes.  If the solids can cook longer than that, put them in now; if you have any last-minute ingredients, hold them back till the pasta is almost cooked.


Fifteen minutes before dinnertime, add liquid to your sauce, bring everything to a boil, dump in the dry pasta and stir it around so it doesn't clump together.  Add more liquid as needed to almost cover the pasta, then turn down the heat so it's simmering nicely but not boiling violently.  Put a lid on the pot.  In ten to twelve minutes start checking to see if the pasta is done.
Yes, but what liquid?
Just about anything that is there and sounds appetizing.  Red or white wine, chicken broth, vegetable broth, tomato juice (or, in summer, the actual watery juice that drains out of fresh tomatoes when you cut them), water from cooking vegetables, even plain water.
How much liquid?
The general pasta plan calls for at least a half cup of liquid per person in the bowl, but since the dry pasta absorbs a lot of liquid as it cooks, you'll need to start with considerably more.  Exact measuring is an unnecessary complication, so I gauge my liquid by the seat of the pants.  I start with enough liquid to pretty much cover the dry pasta in the pot, which probably is about one cup per serving.  Then I heat more water in my electric kettle in case I need to add more liquid to the pasta pot.  (You could add room temperature water, of course, but that would slow down the cooking.) The pasta doesn't have to be totally underwater to cook properly, but it needs to have access to water so it can plump up.
Any rules for the pasta?
I measure pasta by weight -- five ounces works nicely for two of us, a little less with a lot of side items on the menu.  I think cut pasta shapes like penne and rotini work better than long noodles.  Spaghetti or fettucini are OK if you stir frequently and if your sauce is mostly liquid.  At all costs avoid delicate pasta like angel hair, especially in a dense sauce.  It will just clump together and make an unappetizing glob.  (Thank you, my dear friends who ate it anyway -- you know who you are.)

The picture at the top is whole wheat penne cooked in red wine with the last of the zucchetta added about three minutes before serving, some leftover chickcn and fresh parsley on top.  We grated parmesan cheese on right after the photo was made.  One pot, about twenty minutes start to finish.
Posted by Kathleen Loomis at 12:17 PM

Email ThisBlogThis!Share to TwitterShare to FacebookShare to Pinterest
Labels: pasta