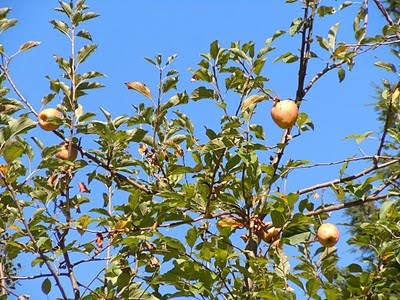 One of the joys of autumn is the apple harvest.  Recently I was blessed with a huge bag of apples given to me by somebody who grows them on his farm, fresh from the trees, unpesticided, and delicious (and I don't mean Red Delicious, which aren't).

We ate one or two but I had the urge for applesauce.  The hard part of the job, of course, is not the cooking but the cutting.  Surprisingly, I only discovered the efficient way to cut and core apples within the last couple of years.  As a kid, I was taught to slice the apple into quarters from pole to pole, then cut out a triangular wedge from each quarter to remove the seeds and core.  That was neat but time-consuming, requiring eleven cuts per apple, eight of them fairly small and fiddly.

Can't remember where I learned this better method.  Instead of slicing through the poles, you move the knife a half inch out from the center and slice top to bottom, missing the core entirely.  Then you rotate the apple and do it three more times.  You end up with four asymmetrical slices of apple plus a square core section that you throw away.  You do lose a little of the meat, but it's a small price to pay for the speed of the processing. 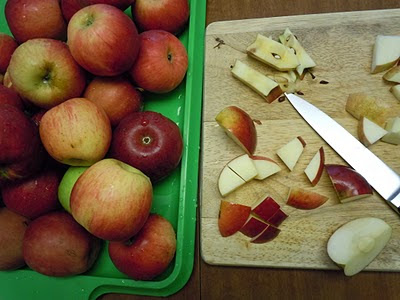 I cut the cored apples into chunks, not so much to get bite-size bits (it will end up as sauce anyway) as to cut the peel into small sections that won't choke you in the finished product.  I put everything into a big soup pot, add a half cup of water, cover the pot and put it all on to cook for a half hour or so on low heat.  The water keeps the apples from sticking to the bottom of the pot in the beginning, but after a few minutes enough juice is produced that you don't need to worry about it any more.

I also like to add some spice, such as cinnamon, ginger or cardamom, but never sugar.  Fresh ginger is particularly nice, grated, but it's OK to use it ground from the bottle.

The best applesauce I ever made came about because I got involved in some engrossing task outside smell range of the kitchen and totally forgot about my pot on the stove.   When I finally remembered and ran back to check on the sauce, it was within a hair of burning but hadn't actually crossed the line.  Instead, it had caramelized and cooked down to a thick, dark brown concoction that was almost like apple butter.  It was so rich that I served it in tiny dishes instead of hearty bowls.  Since then I've tried to duplicate the process but have never gotten close to the glory of that accident.
Posted by Kathleen Loomis at 6:33 AM

Email ThisBlogThis!Share to TwitterShare to FacebookShare to Pinterest
Labels: apples