Do you ever get the feeling that food manufacturers would be just as happy if your food spills or goes stale before you eat it all?  If ever there was a good place for a zip lock bag, it's inside a box of breakfast cereal or frozen waffles.  But no, that might add a penny to the (already inflated) cost.

I needed a new box of grits last week and paranoid as always, checked the price on the shelf before buying.  Discovered that it was 15 cents cheaper to buy a rectangular box than a cardboard cylinder with the same quantity.  And since I hadn't thrown out my old cardboard cylinder yet, this morning I decanted the new grits into the old box.  Ha!  It isn't every day you get to outwit the product police! 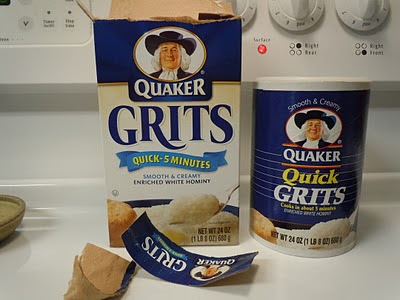 So what do people do who buy the rectangular box of grits?  As you can see, the top was so enthusiastically glued down that I had to tear it open.  I guess if you didn't save your cardboard cylinder box you could decant into a mason jar.  Which might even be a better idea than saving your cylinder, because it would protect against little vermin.  (Ever found your flour or Bisquick infested?  I have.  No fun.)

Anyway, the grits were great on this chilly morning of the first frost, served up in my official grits bowl, a heavy pottery number that holds the heat for a while.  I like mine runny enough so it would be hard to eat them with a fork, with butter and a tiny pinch of sea salt with pepper. 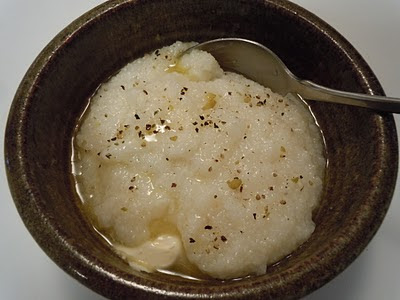 Posted by Kathleen Loomis at 11:26 AM