Responding to my recent post on stealth sodium, Joan mentioned tomato juice, listed as an ingredient in tomato sauce, and said parenthetically, "does that contain sodium?"

Well, Joan, is the Pope Catholic?
I was both dismayed and outraged to check the sodium content of two cans of tomato juice that I found on my premises.  Dismayed, because the single-serving can of Campbell's tomato juice that I keep in the fridge contains 980 mg of sodium -- two-thirds of your daily quota right there.  Outraged, because comparing the two cans of juice -- different sizes, different brands -- was impossible without my calculator. 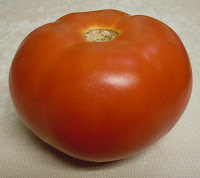 What I found in my own kitchen was the 11.5-ounce can of Campbell's and a 46-ounce can of Kroger's.  Both listed the same ingredients: water, tomato paste, salt and ascorbic acid (vitamin C).
For many years I have been buying Kroger or some other relatively cheap brand of tomato juice for making gazpacho, and the more expensive Campbell's, in single-serving cans, to drink.  I always thought cheap tomato juice was blah, not fit to drink unless doctored it up with a schluck of worcestershire sauce.  I would use the cheaper juice for bloody marys, where it was doctored not only with worcestershire but tabasco, lemon, pepper and vodka, and after the first sip who even noticed the quality of the underlying juice.

But I would pop for the more expensive Campbell's if I wanted to drink it straight -- for instance at the office on those days when lunch never happened (I kept a couple of cans in the communal fridge), or on the road when I needed a refreshing drink and preferred something healthier than Coke.  Not all roadside stops carry juice, but it happened often enough that I always looked.  That prejudice carried over into my retirement, and I still buy Campbell's in single-serving cans as a snack that seems more nutritious than a lot of alternatives.
When I tried to compare the expensive, delicious Campbell's with the cheaper, less tasty Kroger's, it took a few math skills.  Campbell's shows the serving size as "1 can"-- 11.5 ounces -- while Kroger's shows it as "8 ounces."


Have you ever gotten the suspicion that food manufacturers, required to provide nutrition info on the labels, or grocery stores, encouraged to supply unit pricing info on the shelves, don't really want to do it?  How many times have you tried to compare products in the store and found that one shows unit price per ounce, another shows unit price per pound, and another shows unit price per square inch or something else difficult or impossible to compare to the others?
At first glance, I thought the Campbell's was way saltier than the Kroger's, but after I hauled out my trusty calculator I found they were virtually identical.  By converting the Campbell's to an 8-ounce serving, I found the sodium was 686 mg in Campbell's and 680 mg in Kroger.  The calories were practically the same too.
As a kid I never drank tomato juice -- we were a V-8 family.  In adulthood V-8 began to strike me as sludgy and over-engineered, and I switched to plain tomato juice.  But a brief visit to Campbell's website makes me wonder if I should reconsider that decision.  Eight ounces of V-8 has only 420 mg of sodium, and there's a product called Low Sodium V-8 with only 140 mg!
Posted by Kathleen Loomis at 6:05 AM