The wurst thing about our vacation...

When I was a kid my father was co-owner of a weekly newspaper in a small town in Michigan, settled almost a century previously by Germans from northern Bavaria.  The town, called Frankenmuth ("courage of Franconia"), had clung to its German heritage -- I remember walking down the main drag with Dad and him greeting some people in English, some in German.  When Dad and some other ambitious young guys came home from World War 2 they were eager to wrest the reins of government away from the old men and pull the sleepy town into the twentieth century.

Dad had a brilliant idea -- what if the town capitalized on its German roots and imitated Bavarian architecture and ambience?  It already had a couple of old hotels that were well-known for their chicken dinners, and perhaps even more tourists could be lured to visit with some picturesque infrastructure.  He and his pals persuaded the local bank to go Bavarian for its new branch, and the rest is history.  Today Frankenmuth is the #1 tourist attraction in Michigan, with 3 million visitors each year.

We've only been back to Michigan three times in the last several years -- two visits to put my parents into the cemetery, and then a family reunion this summer.  But when we do, we always stop in Frankenmuth, if not for a chicken dinner then for a cooler full of goodies from Kern's Sausage, which makes the best wurst I've eaten on this side of the Atlantic. 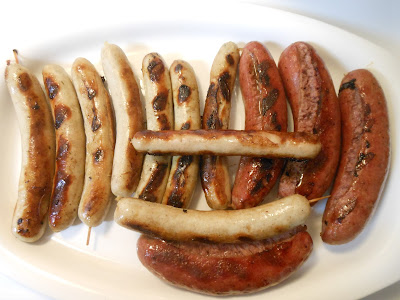 Here's some of what we brought home.  The pale skinny ones with toothpicks stuck in the end are weisswurst; without toothpicks are bockwurst, both made with pork and veal.  I confess I can't really tell them apart, but that's OK because I love them both.  The fat red ones are knackwurst, beef and pork.

The next morning, my husband had a doctor's appointment and figured that he would be read the riot act for high cholesterol.  But no -- he had the lowest readings in years!  I always knew great sausage was delicious, but now I guess it's also therapeutic.

Posted by Kathleen Loomis at 6:07 PM

Email ThisBlogThis!Share to TwitterShare to FacebookShare to Pinterest
Labels: meat