A dessert we didn't try

Le Grand Vefour, one of the most famous of Parisian spots, was opened in 1784 and everybody who was anybody over the centuries, such as Benjamin Franklin and Thomas Jefferson, had to eat there.  But not us.  The cheapest prix fixe menu is 98 euros (about $130).

I was intrigued by one of the 34 euro desserts -- creme brulee with artichokes and bean jam.  Maybe I'll try to make that at home. 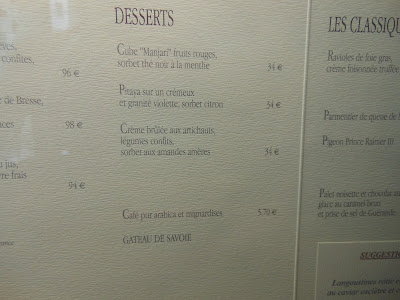 Posted by Kathleen Loomis at 3:40 PM