Eating with your eyes

So you may recall I'm a nut on watermelon -- that, corn, and tomatoes are what say summer to me.  You may also recall that I like my watermelons with seeds, none of this wimpy seedless stuff, and by the way I like big, big melons, none of this wimpy "personal size."  We've gotten some decent melons this year (mostly from the farmer's market), plus some mediocre ones (from the supermarket).  To my delight, they've all had seeds.

But last week, we were late to the market and our two favorite farmers were both out of melons.  One suggested we go across the way and see if this other guy still had one.  He did, but guess what -- it was yellow! 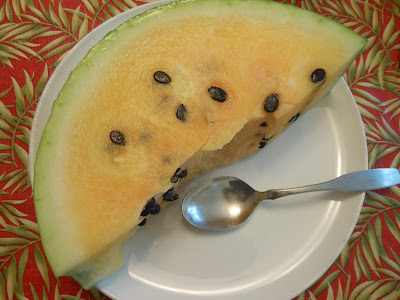 I don't think I'd ever eaten a yellow watermelon before, although I've seen them in seed catalogs.  Under cross-examination I would have to say that it tasted pretty much like a red melon, and was as sweet as you could expect, and had that wonderful cold, juicy texture.  So why do I think it's not entirely as good as a red one? I must eat with my eyes as well as my stomach. 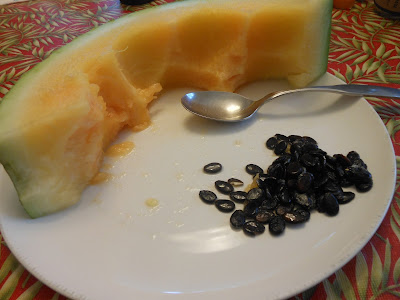 And by the way, I got my wish for seeds -- in spades!  I think the yellow melon has half again as many seeds as a red one.  Or maybe they're just more apparent against the lighter background.

Posted by Kathleen Loomis at 9:12 PM