The muse is hungry

I am one of the two persons in a two-person show that opened earlier this month at a gallery.  I was responsible for the food at the opening reception and when I was setting out the table, my co-artist was mildly appalled to see that the centerpiece of the spread was Cheetos.  How pitifully downmarket. 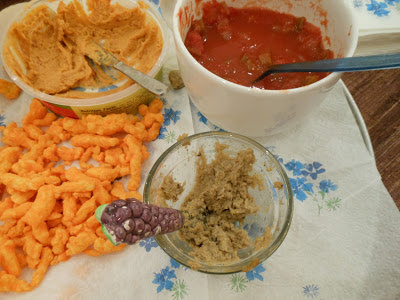 But by the end of the evening, we'd gone through three bags of Cheetos, while the healthy hummus and salsa went relatively unscathed.  Clearly our sophisticated art-loving friends were not above some seriously junky junk food.  We resolved to serve them at every future art occasion we ever have to cater.

I was reminded of an article in a recent New York Times Magazine -- well worth reading -- that probed the addictive nature of not only junk food but other popular products of the food industry.  The industry deliberately hypes their offerings with sugar, salt and fat, even in foods that you wouldn't think needed it -- for instance, spaghetti sauce.  Prego became a blockbuster partly because it's full of sugar.

According to one of the food scientists quoted in the article, Cheetos are "one of the most marvelously constructed foods on the planet, in terms of pure pleasure."

I will second that opinion.  As junk food goes, Cheetos are on my short list (along with Pringles and Smartfood white cheddar cheese popcorn).  I once had to take some pills three times a day that tasted noxious, no matter how quickly I tried to get them through my mouth.  I found that the best way to remove the awful aftertaste was to eat a Cheeto, which I did after every dose (perhaps the only instance in recorded history that a consumer regularly consumed just one at a time).

Posted by Kathleen Loomis at 12:14 PM