I invented "seafood pasta" many years ago when my husband and I were both working and we required our middle-school boys to each cook dinner once a week.  I prepared a cookbook for their guidance, including info such as which pan to use and how soon before dinner to start working.  Seafood pasta had the advantage of being prepared solely from cans and boxes (plus an onion) and not taking very long.

My standard seafood pasta recipe called for a can of tuna, a can of clams (or a second can of tuna), an onion, a can or two of diced tomatoes, depending on how many people were eating, and some pasta.  You can probably figure out how to put those ingredients together, and it doesn't really matter what order you do them in.

As we have become a bit more culinarily adventurous in our old age, the seafood pasta recipe has evolved.  The other night I found myself about as close to ground zero as a cook can be -- practically nothing in the fridge.  We didn't really want to go to the store so I searched around in the cupboard and came up with seafood pasta.  But this was a more exotic version than in the Mom Cookbook.

I did have an onion, so I cut it up and sauteed it in a big pan.  Meanwhile I got to opening cans: a can of artichoke hearts, a can of tuna, a tiny can of anchovies.  I had garlic in the fridge, so I cut that up too.  And best of all, I had a few leftover tomatoes that I had roasted in the oven for a couple of hours several days ago.

To the slow-cooked onions I added the artichoke hearts, allowing them to brown a bit in olive oil over fairly high heat.  Then the anchovies in their oil, stirring and poking with a wooden spoon until they dissolved into a dark, salty ooze.  The chopped garlic went in toward the end of that process, just before I added a third-bottle of wine left over from our reception at the art gallery the night before, and the pasta.

While the pasta cooked in the flavorful sauce, I added the leftover tomatoes and a bit of boiling water toward the end to make sure it didn't end up too dry.  I love this one-pot pasta method; much easier than making the sauce and the pasta separately, also more energy-efficient and resulting in fewer dirty dishes.

Years ago I would have used one or two anchovy fillets, and even today felt a bit reckless using the whole can.  But that turned out to be the secret ingredient: it gave a salty, sophisticated gourmet edge to the pasta. 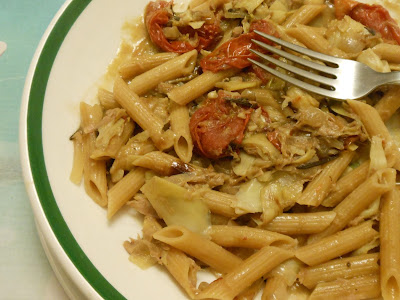 We never use grated cheese when our pasta contains seafood, so we needed the oomph to come from the anchovies and garlic.  And they delivered plenty of that!  I'll remember this combination and do it again.
Posted by Kathleen Loomis at 9:13 PM