If you aren't yet convinced that sugar is bad for you, check out Mark Bittman's column in the New York Times today.  He believes that the preponderance of scientific evidence today is not just that sugar makes you fat, but that it's actually toxic.  I'm inclined to believe him.

My husband, the official salad maker in our household, was unhappy when one of his favorite vinegars disappeared from the grocery shelves last month.  He is always looking for ways to put a new twist on the salad, so he bought a new kind of vinegar to perk up our dinners. 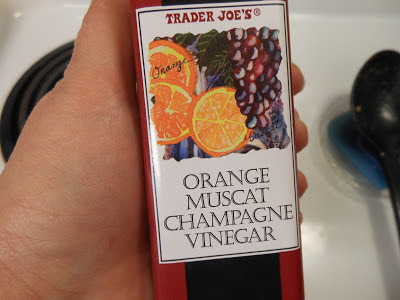 Tonight as he was making the salad he decided to break out the new vinegar.  As he was adding it, he read the label, which proclaims it "a perfect complement to Asian, Latin or Island cuisines."  Does that go with pork chops, he wondered.  Oops, said I, that means it has a lot of sugar in it.

And sure enough, when we read the label carefully it revealed 4 grams of sugar in a tablespoon.  Heck, that's more than I will tolerate in a whole bowl of breakfast cereal! 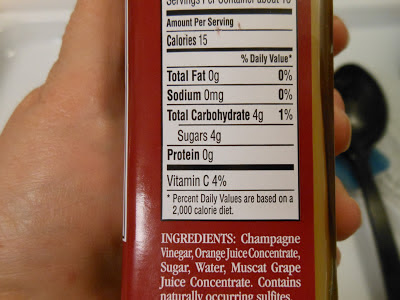 So you might wonder why does vinegar need any added sugar at all? Especially if it already contains orange juice?

I recall my old boss's wife, whose mantra was "add a teaspoon of sugar" to your salad dressing and everybody will love it.  Boy, we have been brainwashed by Big Food.

I can't even tell you whether the new sweet vinegar tasted great.  The salad chef had already added some blue cheese, which totally overpowered the vinegar.  I've requested a salad with minimal ingredients so we can evaluate the vinegar on its own merits.  I'll let you know when that happens, and how the stuff actually tastes.  Meanwhile, I'm an unhappy camper.  If you can't even buy vinegar that's sour, what is this world coming to?

Posted by Kathleen Loomis at 7:37 PM