Dinner from the past

As frequently happens in the afternoon, I asked my husband if he had any brilliant ideas for dinner.  Was there anything in particular that he would love?

And to my surprise, he suggested -- eatmore!

Eatmore was one of his mother's regular dinners, consisting of ground beef, tomatoes, noodles, and other ingredients that hadn't lasted quite so strongly in memory.  We'd discussed this dish in the past, and I had recalled one of my mother's regular dinners, known as "goulash" but bearing no resemblance to any goulash you would find in Hungary or any cookbook.  Indeed, our "goulash" was very similar to his eatmore -- ground beef, tomatoes, elbow macaroni.

Both eatmore and "goulash" were swimming in a lot of tomato broth.  My mother-in-law would often siphon off the broth and serve it as a separate soup course, thus enabling the main course to be served on a plate.  By contrast, my mother's goulash was served in bowls (I think I'm remembering right) and you slurped up the broth with a spoon.

I used to hate goulash night.  Not that it tasted bad, but I didn't like that juice.  It made the whole entree seem insipid and washed out.  On goulash night I would volunteer to serve out the plates, giving my own plate as little of the juice as possible.

My husband, on the other hand, thought the broth was wonderful.

When he expressed the surprising desire for eatmore it was even more surprising that I said why not -- the first time in 42 years of marriage that I had done so.  I asked whether eatmore ever included bell peppers (we owned two big red peppers that were perilously near the end of their shelf life) and he said he thought it did.  Since this was a nostalgia trip, I asked whether it included onions (he thought yes) and asked him to find the closest possible noodle from our pasta shelf.

I found a pack of already cooked ground beef in the freezer, which made life much easier.  Cut up the peppers and an onion, added a fresh tomato that was also in dire need of being eaten plus a can of diced tomatoes.  Set it all to cooking. 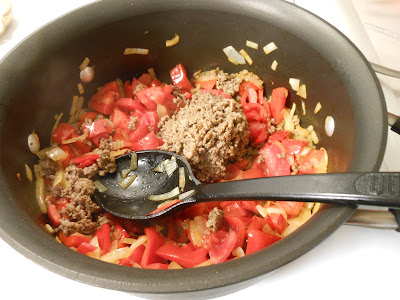 I'm sure both our mothers would have cooked the pasta in a separate pot, but I almost always cook pasta in with its sauce.  Fewer pans to wash, and the pasta absorbs good flavor instead of just serving as a neutral base. 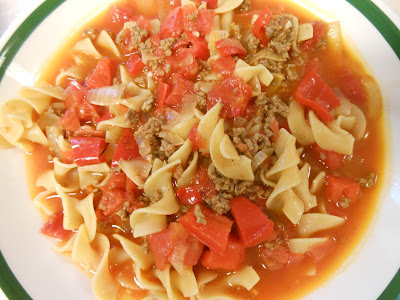 Old habits die hard.  I served up my husband's bowl with lots of juice, but kept mine as dry as possible.  He loved his.  I thought mine was insipid and washed out.  Maybe it was the peppers -- plenty of them, and so sweet that they dominated the dish.  (Probably my mother-in-law would have used green peppers; maybe they would have tasted better.)  Maybe it was the memory of "goulash" hanging over my head.

But at least one of us was really happy!

Posted by Kathleen Loomis at 10:30 PM