Rice cooking -- without all the hard work (!)

Prowling around in the middle of the grocery the other day I found this product -- ready-to-eat, just-warm-up rice!  It comes in a little plastic dish, to go in the microwave for two minutes. 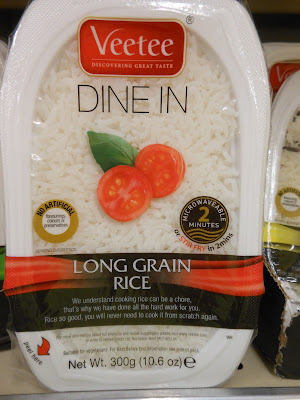 The label reads, "We understand cooking rice can be a chore, that's why we have done all the hard work for you.  Rice so good, you will never need to cook it from scratch again."

This made me laugh.  Cooking rice is so far from being a chore that I can't conceive of the two ideas in the same universe.  With a rice cooker it's totally foolproof, as well as endlessly flexible to add ingredients and variations on the theme.  Even without a cooker, plain boiled rice is pretty simple, as long as you can use a measuring cup and multiply by two (or three if you like brown rice).

But I'm willing to admit that there are probably plenty of people out there who can't deal with this "chore," and for them the cute little dish full of rice is probably an appealing buy for those times when they absolutely have to pretend they know how to cook, and don't mind paying $1 a serving, compared to 8 cents or less if the rice comes from a bag.

What intrigued me was the corporate info on the label, indicating that the rice comes from the UK.  A google expedition revealed that the company is apparently headquartered in London but owned largely from India, a venture started 25 years ago by Indian farmers who wanted to get into the European market. They grow the rice, but process it in the UK to qualify for lower import duties.

Veetee has been selling microwave rice in Europe for some time, both in groceries and to restaurants, but has only sold in the US for a few years.  Which goes to prove that not all the technological "advances" in overprocessed food for lazy or clueless diners come from this side of the ocean.

Posted by Kathleen Loomis at 12:01 PM

Email ThisBlogThis!Share to TwitterShare to FacebookShare to Pinterest
Labels: rice